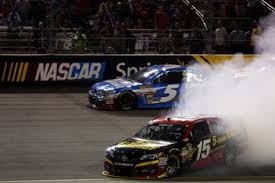 Bowyer's spinout at Richmond during last weekend's race looked to cost Ryan Newman his spot in the Chase, which would have put Bowyer's teammate in his place.

Bowyer sounded disingenuous afterward, but Dale Earnhardt Jr was skeptical from the get-go:

It's not like Bowyer hasn't hadspinouts at Richmond before, either. Here he is in 2011:

Just as skeptical were the governing officials of NASCAR, who felt that the teammates were manipulating the outcome of the race. As a result, they ousted Truex in favor of Newman.

"We penalize to not have this happen again," NASCAR president Mike Helton said. "It's a message from the league saying 'You can't do this.'"

Truex, Bowyer, and Brian Vickers were docked 50 points apiece, but Bowyer's deduction does not affect his position in the Chase, which begins Sunday in Chicago.

Newman was pleased with the outcome.

"I am proud that NASCAR took a stand with respect to what went on Saturday night at Richmond," he said.

NASCAR made it's decision based on the communications between Bowyer and his Michael Waltrip Racing crew, which seemed to indicate the spin was done on purpose.

But not everyone was excited about the outcome. Jeff Gordon, who was also knocked out of the Chase, expressed his displeasure on Twitter.