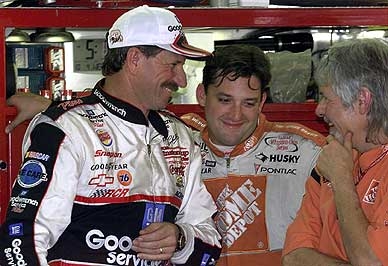 It's been almost 48 hours since Tony Stewart struck and killed follow driver Kevin Ward, and there are still no clear cut answers.

Of course, that blows open the doors for opinions from far and wide, both learned and shallow.

Here's one from a driver, Cory Sparks, who was behind Stewart when the incident occurred:

And here's Dan Patrick's take, which no doubt speaks for many:

One of the more shallow came from ESPN host Colin Cowherd, who averred that NASCAR/Southern culture is the real reason this accident happened. He pointed out how NASCAR was created by bootleggers and how its Southern heritage -- including its mostly Southern fan base -- embraces all the fighting that goes on between drivers. Good ol' boys, you know.

Cowherd, who hails from the Pacific Northwest, also pointed out how Stewart has made millions of dollars from his bad boy image, and that a lot of fans love him the way they loved Dale Earnhardt, whose nickname was the Intimidater.

Earnhardt didn't earn that nickname for nothing.

Basically,  Cowherd was claiming NASCAR's redneck culture is why they play up this kind of stuff. As if rednecks are only found in the South.

I would say if this was 15-20 years ago, he'd be right. But many of the newer drivers weren't even born in the South -- Stewart is from Indiana, a famous racing site in its own right -- and the sport is trying to cater to a more diverse audience. In that sense, it's got work to do.

NASCAR's initial reaction on Twitter which was tacky to say the least, added to Cowherd's argument.

It sounds 'way too close to Other than that, Mrs Lincoln, how did you like the play?

The jabs at Southern culture aside, is Cowherd right? Is NASCAR really to blame for what took place on Saturday?

All you have to do is to check out the response from NASCAR to answer that question.