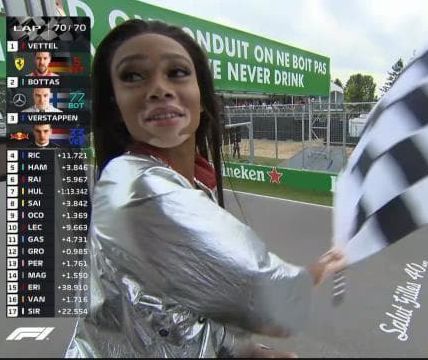 Interesting model Winnie Harlow is buds with Lewis Hamilton, which explains how she showed up on the Canadian Grand Prix tower in Montréal.

It doesn't explain how some bright light handed her the ultimate racing flag without giving detailed instructions.

Like, wait for the last lap before you wave this.

That would've been at the end of Lap 70, not the beginning.

Car No 5 is the prematurely proclaimed victor, Sebastian Vettel.

Frankly, the only way dude was gonna lose with a lap left woulda been if Godzilla showed up outta nowhere, looking for a lost golf ball or something.

So damn near everyone got a chuckle out of the faux pas.

That would not include Daniel Ricciardo, who got roached outta bonus money for fastest lap.

WATCH: @DanielRicciardo’s face when he finds out his fastest lap didn’t count because of the early chequered flag and that it went to @Max33Verstappen 😮😮😮
Poor Daniel 😂😂😂
📺 Sky Go: https://t.co/fxH1316WnM #SkyF1 #F1 #CanadianGP pic.twitter.com/v3lAoSc7V8

Gotta wonder what's next in the racing world after this incident and the pace car crash last weekend at the IndyCar circuit's Detroit Grand Prix.

Believe it or not, an exec from General Motors was driving it.

It appears there's more to this car racing thing than just flooring it.

As to flag waving, whatever happened to taking pride in one's job?