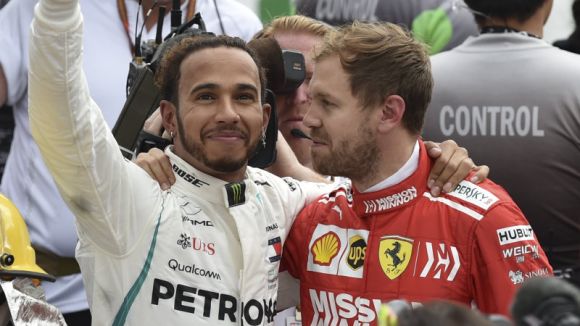 What's cool about 2-in-1 storylines is, by definition, they're gonna feature subplots.

That was the case at the Mexico Grand Prix at the Autódromo Hermanos Rodríguez:

It's tempting to say sharing is caring in the winner's circle, but there's no doubt who's top dog here.

The Dutchman was happy enough by picking up his fifth career Formula 1 victory. His Red Bull Racing crew nailed tire selection and pressure that allowed Verstappen to grab the lead outta the gate and hold it throughout the day.

Hamilton's course strategy was obviously based on the long game and finishing what he started.

Dude only needed a seventh-place result to take an insurmountable overall points lead over Sebastian Vettel, so his focus was on staying in one piece. He did:

Michael Schumacher -- with seven -- is the only driver to hold more titles than Hamilton's five.

For the record, the Briton's only 33.

Hamilton and Vettel had been trading the points lead until Hockenheim, where Mercedes' top driver took the flag and the German crashed his Ferrari on the rainy track.

It opened a 17-point gap that turned out to be too much to overcome, even though the F1 season had another four months to run.

Since then, Hamilton was dominant:

Two races remain on the F1 schedule, but no matter where the lad from Stevenage places, they'll all be victory laps to him.