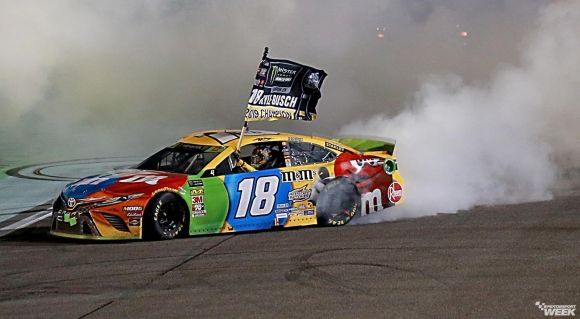 Dude made the Championship 4 for the second straight season, so he obviously hadn't disappeared from post-race podiums.

Kyle Busch left vapor trails when this season's Monster Energy Cup Series got underway, hitting the winner's circle 4 times in the first 14 races. However, since his triumph at Pocono on Sun 2 Jun, the well ran dry.

Meanwhile, the other dudes who made the Championship 4 cut -- Denny Hamlin, Martin Truex Jr, and the full-size Kevin Harvick -- all were first to the checkered flag in the previous playoff round.

Incredibly, this race was actuall Truex's to lose, and his crew found a unique way to do it.

Dude was owning the track -- lapping 27 cars in the first 80 circuits -- when he made what might be NASCAR's first dyslexic pit stop.

However and/or whatever, Truex's pit crew got the front tires mixed up during the second stage.

Dude discovered this as immediately as a hockey player would if he jumped onto the ice after forgetting to remove his skate guards.

Back on the track, dude zoomed to unlap himself but wasn't able to make up for the lost time. The best he could do was get within 4.7 seconds of Busch.

Harvick gambled on tire wear and lost, while Hamlin's engine wasn't holding water. His crew tried to tape the leak, but all that did was risk overheating. He finished in 10th place.

This is the second time Busch has hoisted the hardware, with his first coming in 2015.

And, like that season, it's time for his team to feel all warm-&-fuzzy, too:

.@JoeGibbsRacing's 19 wins in 2019 are the most wins by a @NASCAR Cup Series team in the modern era!

They saved their biggest win for last. pic.twitter.com/WCymG7SXiu

Check out the similarities between his 2015 championship and this year's championship! #Championship4 pic.twitter.com/GyXBtALOtl

Totals like that are gonna produce championships, especially when the closest pursuer's pit crew can't tell left from right when the rubber meets the road.

Or the road tears up another pursuer's rubber too quickly.