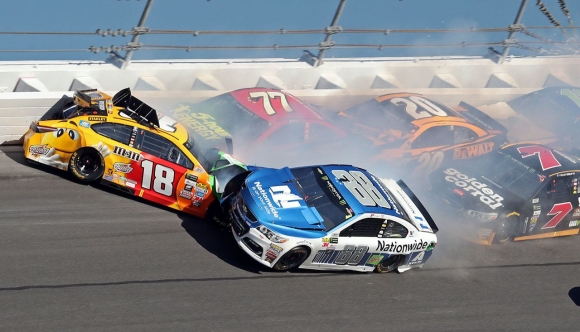 As the old bromide goes, it's not how you start, it's how you finish.

That's the short version for how NASCAR's version of the Super Bowl was won.

The elder Busch brother survived a dust-up on Lap 128 and then powered past Kyle Larson on the last lap to claim the Daytona 500, his first restrictor-plate triumph on NASCAR's top circuit.

In the process, dude lost his side mirror, which gave his run to the checkered flag an international feel:

It works in Florida, too, apparently.

A few more word turns like that, and Busch will become the circuit's Sir Winston Churchill.

While this is clearly a cherished feat for him -- this obviously tops his three runner-up finishes here -- most others will remember this race as a crash-a-thon:

With the new five-minute repair window in force among a litany of new NASCAR rules, only 24 drivers completed the 200-lap course.