It's Called a Catch Fence so Fans Feel Better

Published on 6-Jul-2015 by Alan Adamsson 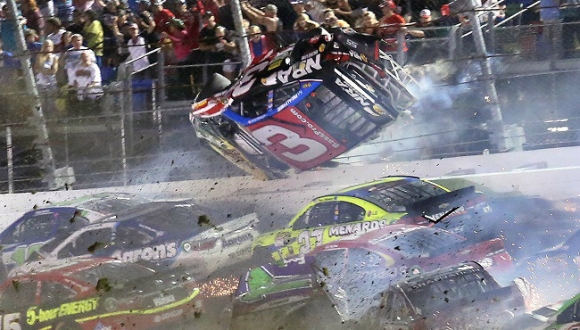 It's called a green-white-checker finish:

And at the Daytona International Speedway, it evokes drvers' comments in restrictor plate races like this one yesterday from Jamie McMurray at the Coke Zero 400:

He wasn't that far off. Here's Austin Dillon without a pilot's license:

At 190mph in close quarters, there was nowhere else for Dillon to go but up:

It's progress, of course, that Dillon walked away with only a bruised tailbone and forearm. Too bad five paying customers couldn't have done the same.

There's now damn near enough of them at Daytona to start organizing annual reunions:

The allure of racing is heavy metal and crazy speed, and with that combination, there's only so much that can physically be done to protect everyone involved from bad action.

Additional constraints on cars and reinforcement on fences aren't answers. They merely offer a false sense of security.

There's a better way that can be done with a few keystrokes in the rulebook.

The green-white-checker finish has gotta go.