Angry White Dude: Is She Bad At Everything? 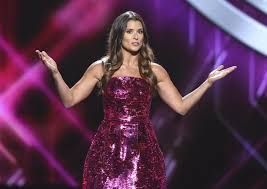 We all know that, thankfully, Danica Patrick has walked away from auto racing.

Maybe limped away is a better description.

It must be nice to be good looking. I wouldn't know.

I do know that if you're good looking, doors magically open for you.

There are degrees, though.

Yep. Same as it ever was.

Take Danica, for example. For some reason, the World Wide Leader's dudes in charge apparently didn't know she stunk as a race car driver and thought it'd be a great idea for her to host the ESPY's.

Must've been a low bar for choices.

Who cares if she was one of the worst drivers?

They just did what they do with all ESPN ladies: throw her out there in a sleevless dress and let people stare!

That goes for the promotional circuit, too.

I get it. Lotsa dudes like to look at her. The problems start when she has to a) drive a race car or b) speak.

Think of all of other female athletes who've excelled at their sport! Any one of them would've been a wonderful choice to be the first female host of this silly ESPY show.

However, let's let the hot chick host and tell a few jokes:

Danica's career as a show host and comedian mirrors her career in auto racing.

You might sum it up in two words: Crash and burn.

One thing we now know for sure is there are three things where she's not very good: racing, hosting a show, and being a comedian.

There's always being a pitchster, of course:

She used to get out-hotted in those bits:

We'll let Anna Kendrick sort all that out some day.

Because Danica's got too much to sort out as it is.