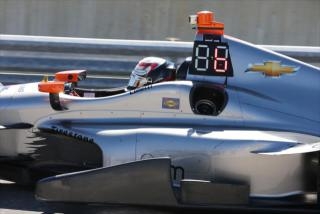 Most action-enhancing innovations in sports are made for TV.

Few would doubt that instant replay was a huge factor in making the NFL into the cash-grabbing juggernaut that it is today.

Ultimately, a torrent of tech would follow. Superimposed first down lines and then scrimmage lines gave fans at home an upper hand on those in the stands as to immediacy of information.

Recently, there have been comet tails to track flight. And to think the first attempt was met with derision.

That was when Fox introduced what fans called the sperm puck for its NHL broadcasts:

It was truly ahead of its time.

And of course, motorsports were right there with them:

Other sports have state-of-the-art scoreboards for the enjoyment of their crowds, and of course, racing is right there with them.

The latest and greatest was installed at Indianapolis last year:

And now, the Indy Car circuit has become even more immediate for the benefit of those in the stands:

So, now fans may still need a program to know who's in the car, but there won't be much doubt as to where that car stands: