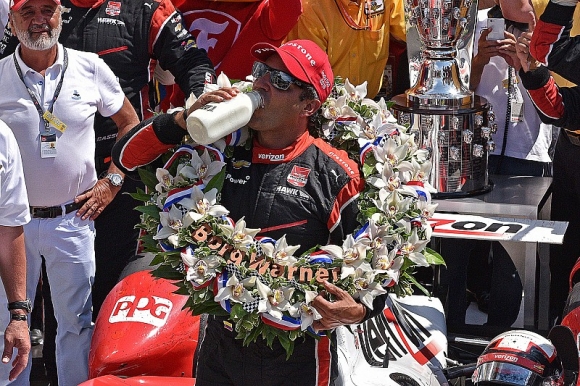 Dude had quite a route to his second Indianapolis 500 winner's circle.

Getting rear-ended, dropping back to 30th, skidding past his pit, and dodging various incidents around the 2½-mile track before nosing Roger Penske teammate Will Power made that bottle of whole milk taste even better to Juan Pablo Montoya.

The Brickyard was busy all day long:

In the 99 years of this event's history, no driver had ever gone 15 years between victories, so Montoya's now the answer to a trivia question.

That's not quite what he expected when he didn't mind being called The Punk after leading 167 of the race's 200 laps back in 2000:

Thinking he had the world conquered at such a tender age, Montoya opted to strut his stuff in Formula 1. The Colombian had his moments, but it still wasn't a fit and nobody was heartbroken when he left.

Montoya's next stop was NASCAR. In short, it didn't go so well and stayed that way. Notably:

So, older and presumably wiser, Montoya has returned to the circuit that seems to be better built for his tendencies.

And in so doing, Montoya's made three racing organization's happy. Indy Car is loving the comback story, while the other two are just ...