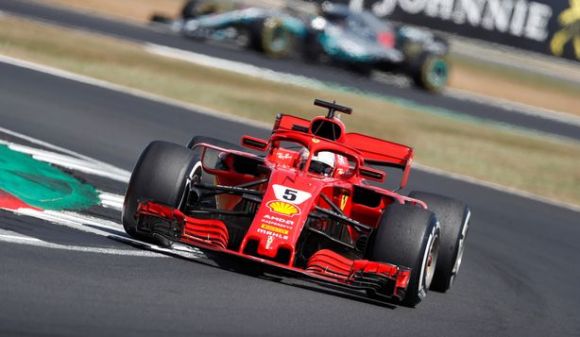 Sebastian Vettel got to spray the big bottle of champagne at Silverstone, but how he earned that privilege has become a point of contention.

Lewis Hamilton was tapped by Vettel's Ferrari teammate -- Kimi Räikkönen -- in the opening lap, coming outta the third turn. Dude spent the rest of the race -- and one less pit stop for new tires -- fighting his way back to second position.

What steamed him was he coulda been spending all that time and effort chasing Vettel for the lead.

What makes this suspicious is Vettel did virtually the same thing to Hamilton's Mercedes teammate, Valtteri Bottas, during the French Grand Prix two races ago.

Mercedes technical chief James Allison wasn't as diplomatic as his team's statement that these were mere mistakes. Dude came right out with it: if it wasn't deliberate, then it was incompetence.

Räikkönen got docked 10 seconds by the race stewards, but even that wasn't without controversy. After all, Vettel only got hit for five seconds in the French incident.

Perhaps Formula 1 was sending a message in their own subtle way.

Meanwhile, the other sideshow had Dutchman Max Verstappen all bent outta shape because his Red Bull team didn't give him wings.

As to the main point on the day, Vettel had his hands full a good share of the afternoon:

Doesn't seem like the Ferrari-Mercedes gamesmanship is gonna be over anytime soon, nor should it be.

The question is how close it's gonna get to the edge and if it's gonna spiral outta control when it does.