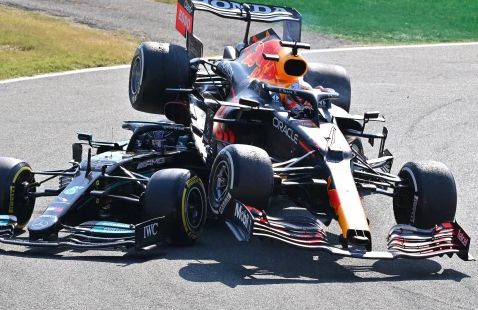 The battle for Formula 1's drivers' title this season is close.

Quite often, too close.

Toss in the fact that they're not exactly on cordial terms, and the intensity of their competition can get a bit spicy.

No need. Not when they do it so often.

Like at Silverstone during the British Grand Prix. The Dutchman thought he'd completed his pass but discovered the hard way that the Englishman had given no quarter:

The title rivals come together at Copse, pitching Verstappen into a high-speed crash.

The Dutchman was able to walk away but he has been taken to hospital for precautionary checks#BritishGP 🇬🇧 #F1 pic.twitter.com/ol1s9dRJoa

Adding a touch of salt to the wound, Hamilton continued on to ultimately take the checkered flag.

Fast forward to today's Italian Grand Prix, and the two were at it again. Only this time, their meeting of the metal cost both of them the race.

It happened at the Monza track's first chicane. Verstappen again thought he had space but didn't. Dude hit the curb, whereupon his car did what it wasn't built to do, failed to achieve low orbit, and took out Hamilton.

It was sudden and scary:

What probably saved Hamilton's life was a safety device -- mandated for all F1 cars in 2018 -- known as the Halo: Verstappen tried to explain away his strolling from the scene of the accident without checking on Hamilton because he saw the Englishman trying to reverse out of the damage, mainly because he was still so amped on adrenalin that he didn't immediately recognize the wreck's severity.

Understandably, that excuse didn't sit well with anybody, including one of racing's biggest legends, who's surely seen it all durin his illustrious career:

I think we should put an end to this and move forward. #F1 #Formula1 #ItalianGP #MaxVerstappen #MV33 #LH44 #TeamLH https://t.co/6naLqw0Juv

The Formula 1 stewards saw it that way, too.

They've docked Verstappen three grid slots for the next race on the schedule, the Russian Grand Prix in two weeks.

Whether that's enough to remind the Dutchman that this is Formula 1 and not a demolition derby is anyone's guess.

Meanwhile, because somebody else had to ...

But in two weeks, it's odds-on the Formula 1 tour will return to its regularly scheduled Hamilton vs Verstappen duel and everyone else will return to their roles as being there for the scenery.