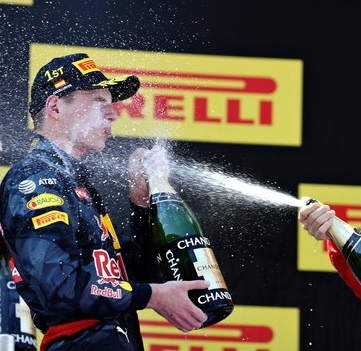 Dude's become the toast of Holland.

And, since it's Holland, Max Verstappen can drink as much champagne as he sprayed after becoming the youngest driver to win a Formula One race.

Verstappen managed his tires well, which enabled him to make one less pit stop than the field.

It's one reason why the Dutch dude took command in the final 22 laps and put himself in position to whip his home nation into a frenzy.

Starting with the announcer on The Netherlands' broadcast crew:

Good to know a few elements of English are universal.

Besides, it's Holland, for chrissakes! These dudes and dudettes suck eels:

Nothing there is verboden gebied.

So, of course the first Dutchman ever to win a Formula One race would be a teenager!