Daytona 500: The Spirit of No 3 Guides Dillon to Triumph 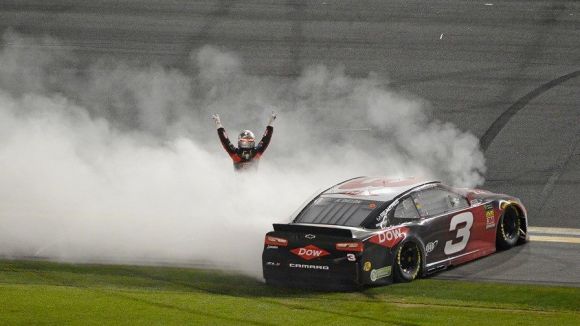 In sports, they separate winners from losers and determine even more numbers that appear on contracts.

There's no place for sentimentality.

Anyone who even casually follows NASCAR knows that Car No 3 and Dale Earnhardt Sr are synonymous.

Now, 17 years to the day that the Hall of the Fame driver was killed in a last-lap accident here, Austin Dillon ironically benefitted from a last-lap crash -- that he instigated -- to claim the 2018 Daytona 500 title for his granddad who is the namesake of Richard Childress Racing and the legendary No 3:

Damn. Aric Almirola is nothing if not noble.

He was the last victim in a plethora of crashes that pockmarked this year's race:

And that's how Danica Patrick capped her NASCAR career, such as it was.

Like many drivers, then, she's been zipped in NASCAR's Super Bowl.

Now, for as long as it lasts, dudette can turn her attention to the NFL's version.

Meanwhile, Dillon can bask in the greatest and most controversial race of his life.