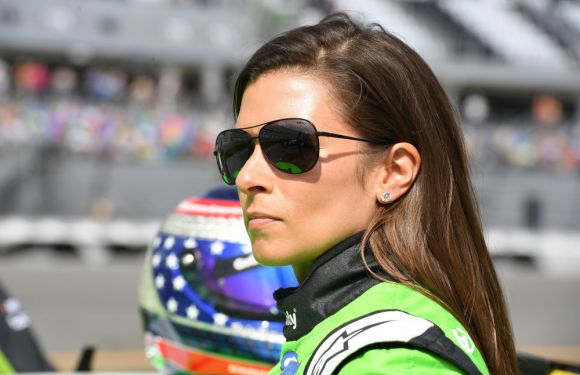 The most overrated, overhyped, and overpublicized athlete of the last few years ended her career the very same way she should have.

With a bang and thud, making her career a dud.

Wow, imagine that! Wonder if she blamed anyone this time?

During Lap 68 of the race, Patrick lost control and hit the outer wall before sliding across the track, hitting the interior wall and finally coming to a stop on the grass.

It really is a perfect way for her to go out, and let's hope she's gone and won't try a comeback.

After more than a decade of racing, it's certainly time for her to move on.

Patrick took the green flag in over 300 races:

When that's a highlight, it really never gets a any better.

Patrick's career was not defined by winning, so we have to make things up to make it appear that she was more successful than she was:

There you go, dudes and dudettes! What a record breaker!

Danica got a job because of her looks. It's painfully obvious she can not drive a race car.

And if that's the case, those carefree dudes over at the Fanorama store are never too proud to spurn an image in the public domain. She spent the better part of her lackluster career blaming her failures on everyone but herself, which is pretty much what most do now a days.

I'm very glad Patrick wasn't harmed during her most recent and hopefully last crash at Indy. I wouldn't feel too badly for her, though. With ESPN's current trend of hiring females with short skirts and sleevless dresses, I'm sure good ol' Danica will turn up somewhere.

So, go for it, dudette. Perhaps with a short, sleevless dress?