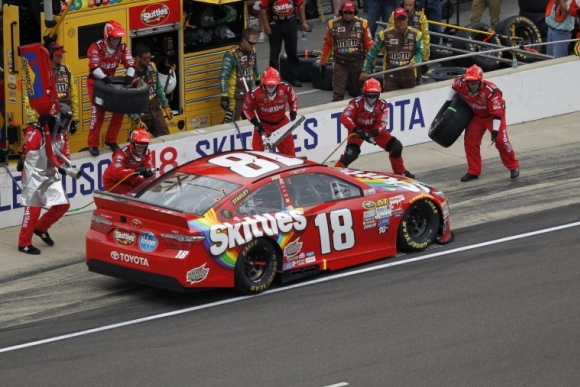 Can't tell your players without a program.

But this is NASCAR. You can tell them without a program.

However, at this year's Brickyard 400, those who collect programs could tell, all right. Many of them just weren't into it for this one.

One particular driver was, though:

Same dude who Skittled his way to the checkers last year.

This time, there was no disruption in the Matrix. Busch was in total control ...

It's hard to push a winner off the headlines, but Jeff Gordon and Dale Earnhardt Jr gave it quite a run.

All things considered, Gordon did well to finish 13th.

Concussion protocol will keep Dale Jr out of Pocono, too, so Gordon will have more time to re-adjust.

So, if another driver wins in the shadow of Gordon and Car No 88, it could be déja vu all over again.