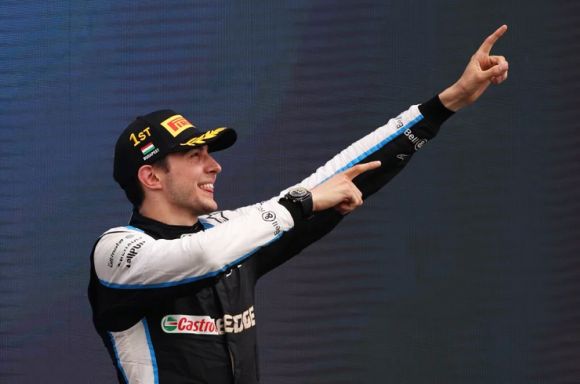 As with so many Formula 1 courses, results at the Hungaroring depend on how well drivers cope with its twists and turns.

No one knows that better than seasoned veteran Sebastian Vettel, who thought he had a shot at dislodging the gridlock that Lewis Hamilton and Max Verstappen have had on podium placements in recent times.

He did indeed, but due to the breaks and cagey seasoned veteran Fernando Alonso, it didn't happen.

This year's Hungarian Grand Prix featured more twists than turns, with Frenchman Esteban Ocon emerging from the havoc as that dude, the one who wrested the race from everyone else.

The day's tone was set 20 minutes before the green flag dropped when it began to rain, causing the teams to open their runs on intermediate wet tires. This worked as expected for Hamilton but somehow not for Mercedes teammate Valtteri Bottas.

Finland's finest hit the first turn too hot and went slip-slidin' away, taking a few friends and enemies with him:

It can be the bummer when you're the last one to know ...

And so it began for Verstappen. And for all purposes, ended.

Bottas had slammed into McLaren's Lando Norris, who bank-shotted into the Dutchman. Not enough damage was done to Verstappen's Red Bull ride, but it was sufficient to cripple him for the rest of the day.

This also led to one of the season's more bizarre scenes. The rain eased up during all the commotion, which caused a mass sprint to the pits for every car but Hamilton's. While everyone else was changing outta the slick tires, dude morphed into the Lone Ranger out there:

This might be the weirdest start from the grid we've ever seen 😅#HungarianGP 🇭🇺 #F1 pic.twitter.com/tRM5h0gOcr

This was likely the miscalculation that cost him the race.

The tire change was something that had to be done, and while the field took advantage of the free stop, Hamilton had to pit a lap later. The result was his return to the track found him in last place.

Mercedes figured it out by Lap 20, calling Hamilton in for a change to hard tires. This move enabled him to catch up with and soon pass Verstappen, who remained mired in 11th place while Hamilton moved up to fifth by Lap 35, the day's halfway point.

This is where the 40-year-old Alonso well and truly entered the scene, a wily guy with 37 victories and 97 podiums -- not to mention driver's titles in 2005 and 2006 -- to his name. Safe to say dude's got a clue more than most, and he just happens to be the 24-year-old Ocon's teammate at Renault's Alpine.

For the rest of the race, Alonso did a masterful job of running interference for Ocon, blocking Hamilton time and time again.

Finally, though, the Spaniard got locked up on Turn 1 in Lap 65, enabling the defending champion to zip by him.

This battle was everything.

However, by time time, there were only five laps left to go. Ocon had benefitted well from his teammate's maneuvers, and he was more concerned by Vettel on his tail. The German, though, had an issue of his own:

Turns out his pit crew calculated what remained in the tank a little too accurately.

However, Formula 1 rules state that there's gotta be enough petrol in a car's tank to conduct a post-race sample for whatever the hell the officials are testing. They require 1 liter; Vettel's car could only provide 300ml.

Thus, dude got the big DQ, and Hamilton took the points for a second-place finish.

And in his 78th start, from an eighth-place position on the grid, and assuming the lead after that wacky restart after the first-lap crash, Ocon notched his first triumph on the Formula 1 circuit.

This brings the schedule to its mid-season break, where teams have to close up shop for two weeks.

For all the stir about Verstappen and Red Bull finally putting a charge into their challenge of Mercedes' and Hamilton's dominance, the points standings at the break looked rather familiar:

Refreshingly, though, for this week anyway, the dude atop the podium's tallest perch was actually someone else.