Published on 7-Mar-2015 by Alan Adamsson 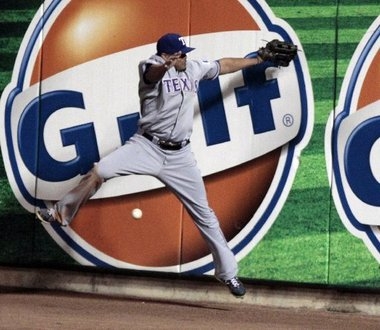 There are clubs still in their crest of being consistent contenders.

The San Francisco Giants come to mind. So do the Detroit Tigers, St Louis Cardinals, Los Angeles Dodgers, and -- for the most part -- the Boston Red Sox.

The Texas Rangers shoulda been on that list longer than they were.

What with Nolan Ryan's influence in the front office, Ron Washington's steady hand on the field, and a fertile farm system pumping out Show-ready talent, Texas looked destined to break through and claim its first-ever World Series title.

They were one strike away in 2011, and then David Freese happened. Twice.

The first came in the ninth inning with the Rangers protecting a 7-5 lead and down in the count, 1-2, and Nelson Cruz apparently not reading the scouting report that Freese liked going oppo with power:

It could be asked what a battleship was doing out there when a cruiser was required. If Washington left Cruz in the game as a precaution for extra innings, it became a self-fulfilling prophecy and, worse yet, set up the 11th for one of the most dramatic moments in World Series history:

And Game 7 became a foregone conclusion.

Texas has not only never really recovered from Cruz’s bee dance in right, it’s become baseball’s version of a haunted house.

At least Josh Hamilton spared the Rangers further frustration by thudding on the Angels instead of them.

They weren’t so lucky with Jurickson Profar, for whom they moved Ian Kinsler to accommodate. Detroit is still blowing them kisses.

Still, it's impressive how quickly this went out of date:

And now, add Yu Darvish to the list of curse victims. Looks like his sprained UCL is at Defcon 1.

At this rate, Nelson Cruz is ranking right up there with the Chicago Cubs' fabled goat.

It's stunning how one play can change the fortunes of a franchise. Or at least, symbolize it. But fair or not, Cruz's epic flailing fail has become the Rangers' kryptonite.

It only figures that, after a boffo season in Baltimore, Cruz has returned to the AL West as a Seattle Mariner. Now Texas gets to see him 19 times in 2015. It remains to be seen if he'll be a curse with a personal touch, but for frustrated Ranger fans, he'll be a recurring reminder of what coulda been but never was.