Your Angel in the Outfield: Josh Hamilton or Jesus Christ?

Published on 6-Apr-2013 by Xavier McSpaniel 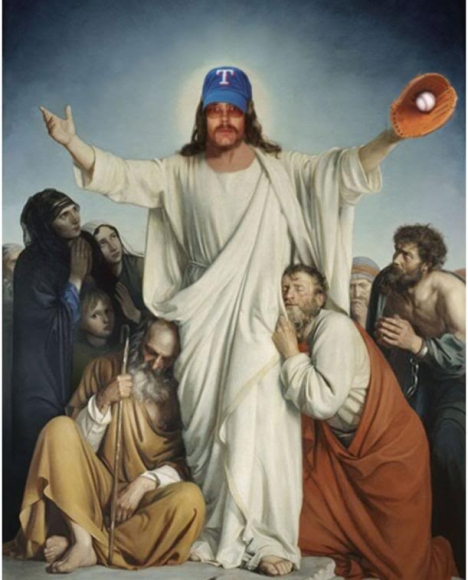 Josh Hamilton -- enigmatic mix of baseball prodigy, reformed junkie and ardent God-botherer -- got stoned in his return to Texas.

It was the old-fashioned kind: claustrophobic arena, harangued by an angry mob, metaphorical rocks raining down from on high. Hamilton found the going rough, so rough he employed a considered comparison, enlightening us to the extent of his earthly suffering:

"Where was Jesus got-after the most?" he said, "His hometown. Obviously, baseball-wise, this was my hometown.”

Who does the former AL MVP think he is? Chris Brown? Jon Jones? For the sake of argument, though, let's assume Josh will rise from last year's tobacco-chewing death and ascend to elite level again in Season 2013. Would that elevate him over the Christian Messiah on baseball's all-time depth chart? Let's line up their games and find out:

Hitting for Power: Both men have carried big sticks during their careers. Hamilton went otherworldly with his womping at the 2008 Home Run Derby. Jesus, though, has pretty much been responsible for every long-ball in the history of the game. "Christ, he got hold of that one!" "Christ, the park can't hold him!" "Christ, he must be on the juice!" Advantage: Jesus

Defense: Hamilton has never won a Gold Glove and his reputation went to Hell when he gave a gift to the A's on the final day of the 2012 regular season. Christ is an outfielding phenom with perfect form. Advantage: Jesus

Team Leadership: Josh can get 'Head and Shoulders' shampoo for his teammates; Jesus can turn Vitamin Water into wine. The Red Sox clubhouse just got born again. Advantage: Jesus

Clearly, Hamilton's comparison is spurious: the Angels' disciple falls short in all major categories. And it's a fair Bovada bet the Big JC wouldn't get booed by the God-fearing faithful at Rangers Ballpark.