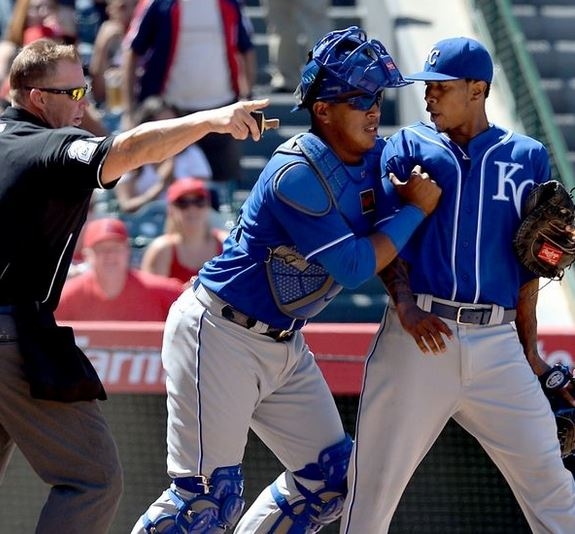 Yordano Ventura must need an XL cup if he really has the balls to be picking as many fights as he has.

Despite the fact that it’s not even May, seems like he feels the need to make enemies with every team he faces.

The 23-year-old Dominican right-hander is beginning his third year with the Kansas City Royals by getting suspended for seven games after being a part of three bench-clearing incidents in April.

As you saw, the largest of these brawls was against the White Sox in Chicago. After fielding a scorcher up the middle, Ventura deemed it necessary to toss some expletives to Adam Eaton before throwing him out at first. After being called out, Eaton quickly turned around to make his way toward Ventura, and thus begun an NHL-style brawl that resulted in the suspension of six players: four from the Royals; two from the White Sox. Fellow starter and mentor Edinson Volquez describes Ventura as “a pretty emotional guy”, which is the simplest way to put it. Dudes like that are out there.

But when you get ejected from 60% percent of your games so far this season, it’s hard to say that emotional accurately sums up the situation.

Throwing tantrums every five days isn’t exactly the best way to make friends. After being handed the longest of the six suspensions following the Chicago brawl, Ventura did offer an apology of sorts. Well, not so much an apology as saying, Yeah I know people probably don’t like me; I suppose I should work on that.

I’m paraphrasing, but you get the gist.

To me, baseball has always been the classiest of North America's pro sports. That’s why I don’t typically care for on-field melees. If you get paid millions to play a sport, I think you should show a little more decorum than that. I make a hell of a lot less than these guys, but you won’t see me throwing a fastball at someone’s shin every time I disagree with them. (However, I do tend to indulge in passive-aggressive e-mails).

In any case, the four suspended Royals have lodged appeals so they can still play a few more games before the ultimate decision is made by MLB.

Time will tell if the Royals pop some Ritalin and stop fighting every team that scores a run against them. Ventura, in particular, will need to figure out how to bottle it up like the rest of us.

In the meantime, he should just be thanking his lucky stars that he’s pitching in the American League, where he doesn’t actually have to go up to bat himself.