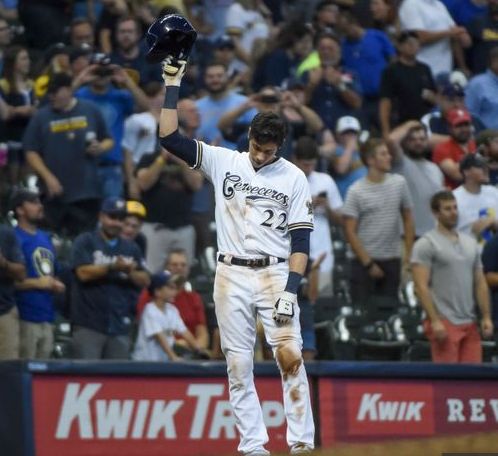 When Derek Jeter and his own personal kajillionaire bought the Miami Marlins, he'd already decided that the club's combination of payroll and fan base didn't match.

So, off went Giancarlo Stanton, Marcell Ozuna, and Christian Yelich to greener pastures.

At this point in the season, where no one in in the NL East really overwhelmed, diehard fans have gotta wonder.

Especially since it's beyond possible all three could be helping their new teams make the playoffs.

Yelich was that trio's third to want outta Miami, and the Milwaukee Brewers have got to be pinching themselves because of it.

As opposed to the Cincinnati Reds.

History's first professional baseball team were on the wrong end of it this time.

Put them all together, and that's a hela lotta hitting for one dude to do:

For example, Yelich is now only the fourth player since 1920 -- when they stopped putting kryptonite, heavy water, and who-knows-what-else in the ball -- to hit for the cycle while getting six knocks in a game. He's now forever linked in baseball lore with:

Yelich has just joined Hall of Famer Fred Clarke as the only other dude in all of baseball lore to have done this sorta double on one opponent. Clarke did it in two separate seasons: 1901 and 1903.

Yet again, we observe that history may not repeat itself, but it sure has a way of rhyming.

Now, all Yelich has to do is get into the Hall of Fame.