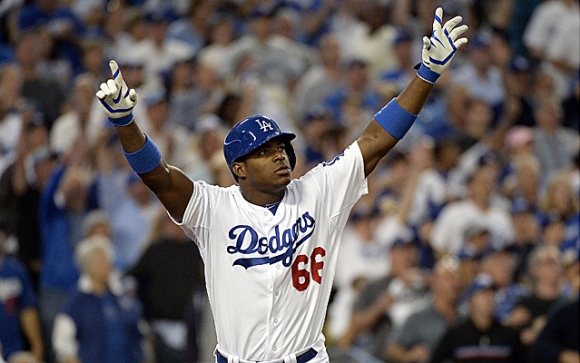 Once again, the Los Angeles Dodger diva makes his way into the headlines. And once again, it's for something negative.

Yasiel Puig took the National League and MLB by storm last year when he rocketed through the minors on the way to his major league debut. After a jaw-dropping rookie campaign, Puig has been as much a headache as an asset. Right now, it's hard to tell if he's still adjusting to a new culture or simply going down the road to jerkdom.

Apparently, the wreckless driving citations were more a precursor than a wake-up call. Although I praised Puig for making the smart choice -- deciding to voluntarily relinquish his driver's license and hire a driver -- his actions on and off-the-field are definitely cause for concern.

First and foremost, his fit physique is no longer there. Puig showed up to spring training with a 20-pound spare tire.

Secondly, his tardiness is starting to raise eyebrows. He's starting to feel content with being the last person to show up to practice, which is possibly a drawback to hiring a family member as his driver.

And lastly, because of his tardiness and unexcused absences, Puig's work ethic is being scrutinized. After fouling a pitch off his right leg, Puig decided to take two days off. The general consensus was that was not cool.

We all know how outspoken -- and sometimes obnxious -- Puig is. He's brash and flamboyant, but he also has a skillset that is, in a word, special.

Just like the corrective course of action he took towards his driving issues, Puig needs to re-focus on what's most important to him. Fortunately, he's got immediate access to All-Stars who know how to manage success. Adrian Gonzalez is as humble as they come and has been willing to mentor Puig, redirecting his emotions and channelling his seemingly bottomless pit full of energy. Hanley Ramirez is all too familiar with the difficulties that accompany fame. He's also willing to mentor Puig in the art of being mentally strong.

All Puig has to do is take a step back and accept this experienced guidance.

If he opts not to do so, the MLB might be short-lived for him.