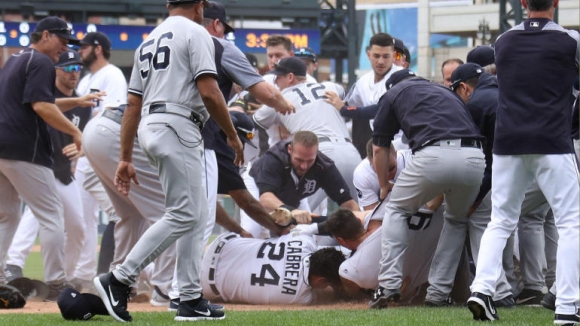 It appears a baseball game rudely interrupted a series of fights between the New York Yankees and Detroit Tigers at Comerica Park yesterday.

There's an awful lot to unpack here, with all of the standard MLB tropes regarding retaliation and retribution being faithfully observed.

Maybe we should get right to the main event, which involved Tigers star Miguel Cabrera and Yankees backup catcher Austin Romine.

Those dudes seem to have a genuine disagreement.

Perhaps some context would help.

Miggy had literally just been thrown at by New York pitcher Tommy Kahnle, causing both him and manager Joe Girardi to be ejected from the proceedings.

And why would this precipitate an ejection?

Well, Tigers starter Michael Fulmer had previously hit yet another Yankees catcher, Gary Sanchez, after he had the unmitigated gall to homer off him earlier in the game.

Of course, this triggered the requisite warnings and everyone then started acting like mindless thugs following an antiquated code.

The Yankees Dellin Betances entered the game in the seventh inning and did this:

Then in the eighth, Todd Frazier of New York caught one in the ribs, clearing the benches for a third time.

All told, there were eight ejections between the two teams, not to mention all of the equipment strewn about the field.

Ah, you really can't beat fun at the old ballpark.