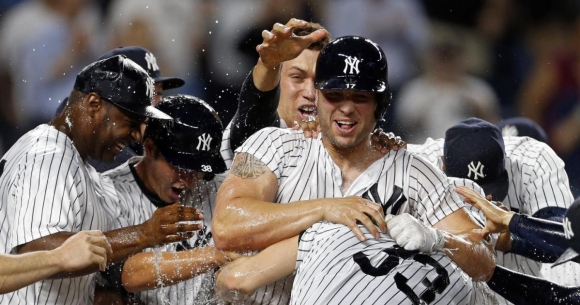 Pretty much everyone digs the long ball, particularly the ladies.

Following this logic, the New York Yankees were downright irresistible the other night in the Bronx.

The Baltimore Orioles managed to blow a 9-1 lead and eventually lost to the Bombers 14-11 in 10 innings.

How could such a thing happen?

Well, the long ball, of course.

Have a look at this two-run shot from the freakishly strong Aaron Judge.

That ball was in a terrible hurry to leave the yard.

Next on the agenda is Jacoby Ellsbury and his very first career grand slam.

This brings us to the lovable Matt Holliday walking off in the bottom of the tenth.

Of course, things like this can't happen without the generosity of the opposing bullpen, and the Orioles were certainly in a charitable mood.

It would be negligent not to mention another homer in the game, this one courtesy of Baltimore stud Manny Machado.

The Orioles lost the game, but 470 feet needs to be acknowledged.

It's a shame Machado can't pitch, though.