Yankees Spread the Canó Savings Around; Will It Work? 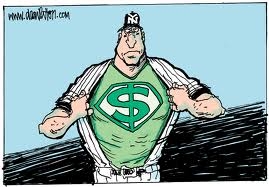 The Boston Red Sox are the 2013 World Series Champions. Trust me, that greatly upsets the Evil Empire, aka the New York Yankees.

So what do the Yankees do?

They go right out and grab Jacoby Ellsbury from them and overpay him big time. Now, Ellsbury is a very good player whose history is such that he either has a great season or gets hurt. The Yankees are hoping he can stay in the lineup for a full season and be the catalyst from the leadoff spot.

New York also overpaid for Atlanta catcher Brian McCann, who is another quality player who will upgrade the position but is injury prone. Carlos Beltrán was next, and again, the Yankees overpaid but upgraded a position. Beltrán will add pop to the lineup if he can stay healthy.

With these three, the Yanks are much better off than they were last year.

OK, you say, what about the disrespected Robinson Canó?

Well, I agree with the Yankees here, even though they really have no backup plan since Omar Infante signed with the Royals.

New York did offer seven years and $170million, which, in light of the Rodriguez, Pujols, and Hamilton contracts -- not to mention past long-term disasters like Mike Hampton's deal with the Rockies -- is more logical than what Seattle just swallowed. Canó gladly took the money, a nifty 10-year, $240million deal that put paid to the Mariners' build-from-within program.

Should Canó now shut up? Yes, and quickly. He just needs to go play out West, collect  his dosh and try to help his new club finish .500.

Should Yankee president Randy Levine shut up, too? Yes, and please! Most of his statements are moronic; I'm beginning to wonder if he's due for the same rip job that the Seattle Times did on Mariner GM Jack Zduriencik. He's informed the world that Canó is sad he's not a Yankee. Well, if Canó was so sad, he would've taken the Bombers' offer and lived quite well.

Who hired Randy Levine, anyway? Couldn't they have just kept George Costanza and promoted him?

So will the Tigers, and the Red Sox are the champions until someone beats them.

Whenever New York falls short of a goal, the wallet opens up and Brian Cashman does the GM thing with loads of cash. Last season, he couldn't help the Yankees overcome all the injuries. This year, he still needs infield help and pitching help. Let's see if he can do it and stay under the $189million salary cap.

My guess is he won't and he put in for more money to try and make the Yankees relevant again.