Published on 8-Apr-2016 by Alan Adamsson 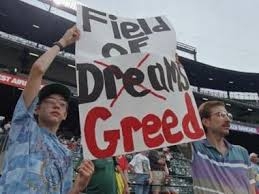 Talk about a satirical bit that became a win-win-win:

The stunt definitely added the pizzazz of actual people to the scenery behind home plate, even though they had to clown it up to do it.

Yankee payrolls require the landed gentry to fork over wheelbarrows laden with dosh, so their financial model isn't changing anytime soon. Whether or not the club's suits will ditch their nix on home-printed tix remains to be seen.

At least, by the third game, the Yanks congratulated Oliver's beneficiaries, adorably adorned as dinosaurs. Perhaps unintentionally, it was a fitting allusion to the team's ticket policy. The same could be said for one pair winning fans' costume choice for the second game. They came as sharks. The others were unicorns, apparently how the Yankee brass sees the world. Here's a unicorn thought: It'd be awesome if Oliver's producers increased their promotional budget and the Yankees met them halfway.