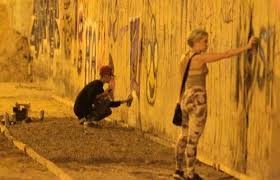 As an ancient contributor to one of the most talked about snarky sports web sites out there, I know a thing or two about the National Pastime.

No, not tagging, silly. Baseball.

Therefore, it grieves me to confess my virtual ineptitude at this thing called fantasy baseball.

As an example, I'm not sure how you create a waiver, but my team now has eight of them. Martin's Team's Week 7 results: less than encouraging. Last week, our ball club got its butt kicked. Again. We posted only two measly wins to sixth-place Nicholas's Team's seven.

I guess holding the lead, like I do, in moves made with 27, it might appear to some that I'm reacting to my stay in the cellar like a chicken with its head cut off.

And Week 7's horrific results kinda compelled me to look at my roster makeup yet again, but since it's a 25-week season, I've decided to hang with my current group for a while.

Still, although last week's tallies were poor, there are a few bright spots to report: Yes, the preceding listed players are all Giants. As a G-fan, I get a greater sense of connected-ness with the Orange & Black that way. Plus, since I'm always following the goings on with Giants players, I know when to dump someone like McGehee.

That fact notwithstanding, my roster is peppered with other teams' stars playing key roles; Oakland's Josh Reddick and Detroit's Yoenis Cespedes keep Nori Aoki company while he's patrolling the outfield. Unfortunately, I'm not able to make a distinction as to who's in right, center or left; I'm only able to select just three general OF-ers.

Besides, I replaced him with the Brew Crew's Adam Lind because he seems to have hit a lot of home runs for this stage of the season.