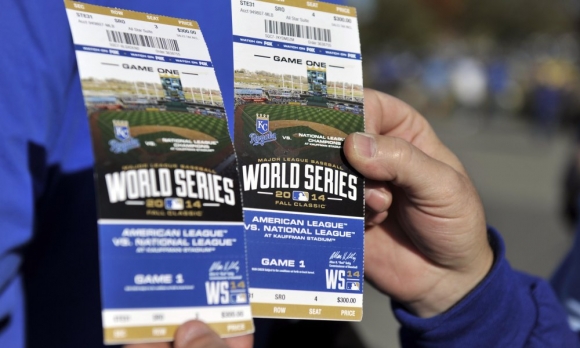 Yes, this is the New York Mets' first visit to the Fall Classic since 1986.

And what with 30 teams these days -- not to mention Metropolitan history in the interim -- who knows when they'll be back again? Which is why TV viewers noticed a block of fans at Kaufman Stadium for Games 1 and 2 decked out in Mets orange. It made fiscal sense if the objective was to watch their team in person:

That's a grand total of $950. Beats the hell outta where the Citi Field prices were. And they got up close and personal with some of the world's best BBQ.

Now, with the Mets down two games, ticket prices at Citi Field have been edging downward. However, that means a good deal still costs $709.

If Terry Collins' crew can extend the Series to at least six games, a return trip to KC might be in the cards again for the Apple's great unwashed who have to be more mindful of a dime note than the 41,800 who pull wads of them out of their front pocket.