World Series Hero Schwarber on His Way to Triple-A 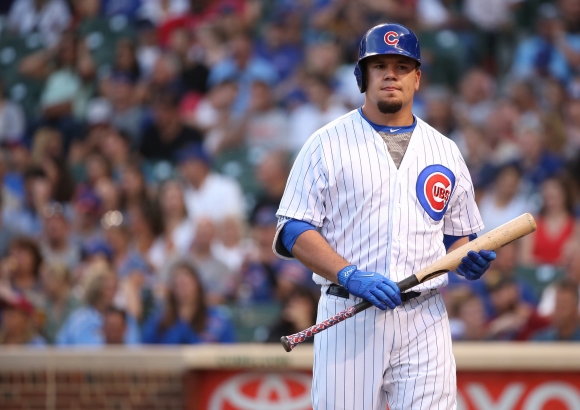 One night, late last October, there was a buzz sifting through the Sloan Park crowd in Mesa, Arizona.

It was a special night for Chicago Cubs fans watching an Arizona Fall League game, where tomorrow's MLB stars are showcased while they get additional seasoning.

One of the Cubbies' future stars in the Mesa Solar Sox lineup was a rarity: someone on a rehab mission:

Dude was involved in an ugly outfield collision that shelved him for the regular season.

However, the dynamo-on-demand never gave up on the thought of being available if history beckoned.

Turned out it could, and as soon as the Cubs clinched that night -- as a rising celebration in the Solar Park stands confirmed -- and Schwarber's Solar Sox teammates weren't gonna let the moment pass without him:

Who knew then Schwarber would get that call from history?

And who knew how explosively he'd answer it?

Such was Schwarber's luster that, in the afterglow, manager Joe Maddon turned Old School baseball upside down and made him a leadoff hitter this season.

Neither did putting him in the power spots or lower in the order, where the assumption is a hitter will see more fastballs.

And his season has only gotten worse.

The Cubs have been left with no alternative, really.

Kyle Schwarber, World Series hero, will get his next ABs in Iowa City.

The question now is when -- or, perish the thought, if -- he'll return from that cornfield.

What's promising is dude's got too much talent to stay mired. Hopefully, a dose of AAA pitching will snap him out of whatever ails him.

He's also got some front-office gravitas for his abilities, but the harsh truth is, relatively speaking, the Cubs still don't have that much of an investment in him.

Fame's back stage is littered with the debris of one-hit wonders. Schwarber's now on the clock, trying to keep it from freezing him in time with but one memorable act.