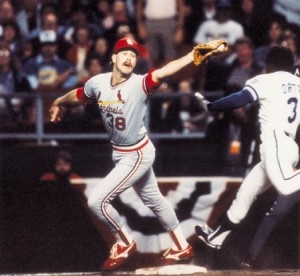 It took a Kansas City blowout to show how even this World Series is.

This drubbing resembled the sort of attack Kansas City featured for much of the season. In other words, not only do their uniforms resemble those of the Los Angeles Dodgers -- there's a boring story about LA's red front number -- they're also similar to how the Bums put together big innings in the 60s, ie- lotsa contact and a bit of speed.

Put those into a seven-run second innings, and that's your ballgame:

The needless passing of a potential star was duly noted, with the St Louis Cardinals' response to this tragedy being subtly poignant:

Time to turn the page, in so many ways.

This Series just needs a winner. A signature moment wouldn't hurt, though. There's been a few in Games 7. One in particular trumps them all. To wit: