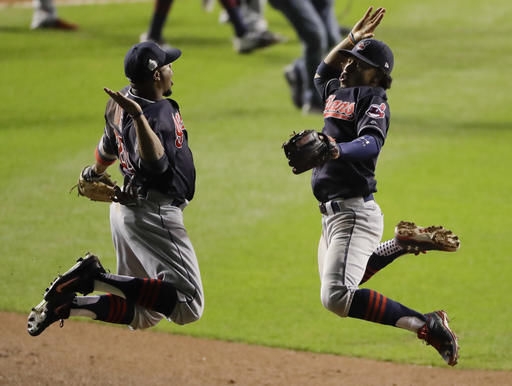 Is Terry Francona pulling all the right strings these days or what?

Tito's kid takes a morning swim, gets to the yard around noon, and starts to study the night's matchups.

That's similar to what most managers do.

But the dude who led the 2004 Boston Red Sox to its first World Series title since Babe Ruth & Co did it in 1916 and repeated with them in 2007 parlays his magic onto stats everyone else sees, and then comes up with results like this:

Was Cleveland's usual DH Carlos Santana a Francona hunch, or did he have a stat advantage on the type of game Lackey throws?

Either way, dude was a right-place, right-time first baseman whose blast took those who ponied up $3000-a-seat tickets leaving little to show for them except souvenirs.

So now, the Indians' drive to break their own World Series drought -- since 1948 -- is only one game away from realization.

And, as fate would have it, Wrigley Field's famous conditions turned the tables on its denizens.

Kipnis, in fact, is the only player other than Babe Ruth who's hit a three-run bomb in a World Series game at Wrigley.

In his family home, anyway, that makes him the pride of Northbrook, Illinois:

Francona's now gotta muster one more whit of genius to make this a done deal.

With a 3-1 Series lead and a trip back to Cleveland if it doesn't happen in Game 5, dude's not so concerned about magic as he is with odds:

Not to Terry Francona.