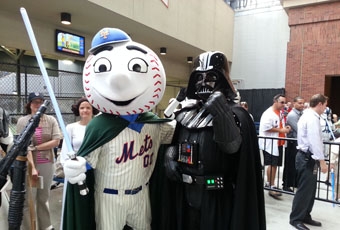 It may not have been Asgård, but the hammer came down in the Apple.

All sorts of hammers, in fact.

And it's just what the New York Mets needed to get back in the Series.

Down two games to none, the Amazin's got a couple of bombs and shutdown heat from the third inning onward to stick it to Kansas City, 9-3:

The game was also notable for a couple of sidebars:

Syndergaard is of Danish heritage -- originally Søndergård, it translates poorly; sønder = probing and gård = yard -- and while hammer is seamhead slang for a curve ball, Norse legend's god of the skies would be proud of that 100mph lightning the lanky right-hander serves up.

Just know the hammer's called Mjölnir, and only the most worthy can lift it ... or the most mechanically inclined:

Anyway, Syndergaard made Royals bats feel that heavy throughout the middle innings. As a result, New York's got a shot at tying the Series in Game 4.