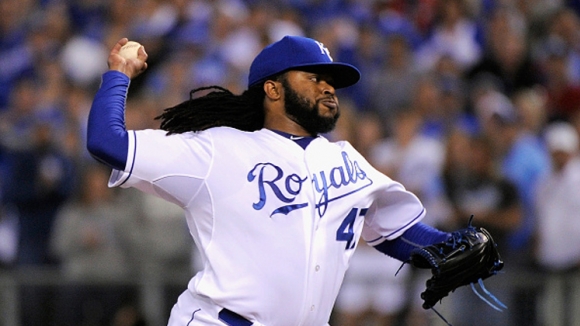 First of all, he played in Philly.

Secondly, he's well familiar with New York area crowds -- especially Rangers fans -- who were just possibly the first to popularize the two-syllable jeer of an opponent's name: his.

Two seasons ago, that derisive chant migrated to Pittsburgh, who put it to effective use:

Dude got pulled right after that and has heard the chant on the road ever since.

But in the pitcher-friendly confines of his new work station in Kansas City, he now hears a more melodic mantra that includes his two-syllable first name. And this is why:

When the Royals claimed their only World Series title, Bret Saberhagen and Danny Jackson each tossed two full-routes in the playoffs.

A hint of things to come?

If the Series goes six, Cueto will get that shot. Fortuitously, he'd be trying it at home-sweet-home, missing New York fans who would've been only too happy to take inspiration from their hockey brethren.