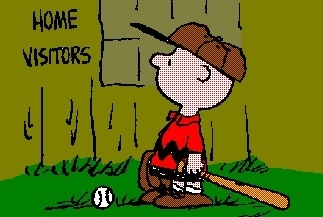 And they were out in force when the Kansas City Royals outlasted those Metropolitans from New York in a 5-4 World Series marathon that ran 14 innings in just over five hours.

The wacky stuff appeared early, when an outfield miscommunication put Royals' leadoff dude Alcides Escobar into the history books with the first Series inside-the-parker since 1929:

A few bar bets will be won by knowing the fleet Escobar joins a dude nicknamed Mule in this category, or that both Cy Young and Babe Ruth also gave one up in the Fall Classic.

Then there's the fact that the Old Perfessor hizzownself, Casey Stengel, hit one decades before he became the Mets' first manager, setting the team's personality in stone:

The eighth inning almost featured a curtain call from the ghost of Bill Buckner:

But Hosmer was let off history's hook when Alex Gordon went deep off closer Jeurys Familia, who hadn't blown a save since the end of July:

All of which left it for Hosmer to redeem himself after Mets captain David Wright bobbled a grounder that set the stage for Game 1's closing act:

And yes, more trivia: That was the first time a Series game had been settled by a walk-off sacrifice fly.

In the end, the Mets' defense cost them two runs, putting them at a -1 in that category vis-à-vis the Royals, a stat of harsh reality that turned out to be the most telling one of all.