World Series: Dodgers Do a Lot with a Little to Force Game 7

Published on 1-Nov-2017 by Alan Adamsson 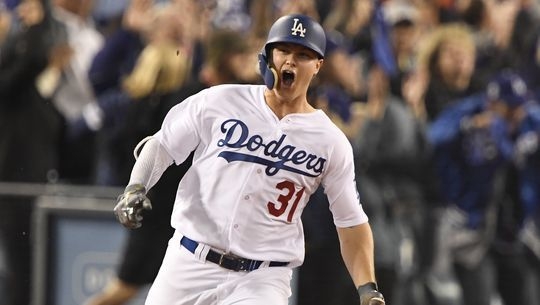 Justin Verlander had yet another brilliant outing for the Houston Astros.

Unfortunately for him in Game 6, though, dude needed to be as lucky as he was good, and that didn't happen.

Instead, in this one, the third time wasn't a charm:

Dude's the only MLBer who swings a 34-34. Seems like he found a way to get that lumber up to speed in time for the Fall Classic after a subpar regular season:

Toss in Chris Taylor's swing-plane efficiency, and that was the offense Los Angeles needed to get the 3-1 victory that will stretch this World Series to the limit.

Verlander's luck had run out. Taylor was beat on the pitch he hit -- no way that was an oppo swing -- but he made enough contact to single in the tying run.

And the tide had turned.

If there was an eyebrow-raiser in this game, it was 'Stros skip AJ Hinch pulling Verlander for a pinch-hitter in the seventh.

Josh Reddick had walked, and Verlander's capable of bunting. Had that happened successfully and the following results remained the same:

After that, who knows how Verlander woulda pitched Pederson?

The dude who's not wondering what if is on a roll in Las Vegas.

All that the sports books there know is he went large on the Series' Game 1, let it ride, and is around $8million up right now.

If he runs the table by hitting on Game 7, that's gonna be the real slick-balls story this post-season.

Either way, it'll be the ultimate trick-or-treat.