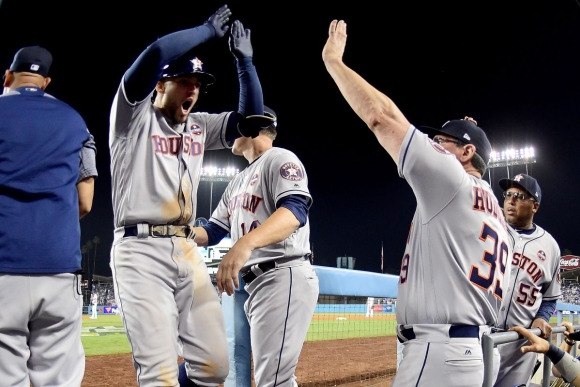 Houston ace Dallas Keuchel joins a host of MLB slingers who are absolutely positive about the 2017 season's top story.

The ball is juiced.

A compelling case was made mid-season, and if ever a single game could be positioned as a metaphor for the argument, Game 2 of this year's World Series would be it.

If this keeps up, MLB's gonna need to change a few rules to give outfielders a chance.

How amazing was it that a 3-3 game going into extras wound up being a 7-6 Astros victory in 11 to square the Series at a game each?

Almost as crazy as an extra-base hit being caromed into a single by the bill of Chris Taylor's cap:

Or as impomptu as Yasiel Puig taking a moment to break in his glove a bit more after narrowly missing what coulda been a spectacular catch:

Or that arguably the game's coolest play was Kiké Hernandez going oppo with a 3-1 pitch, enabling Logan Forsythe to put the game into extras in the bottom of the ninth:

The Series-record eight bombs -- and the all-time MLB record of five in an extra-inning game -- is notable but, being real, not all that much of a surprise.

In addition to the alleged juiced ball, a rapidly growing trend is also at work.

JD Martínez is the poster boy for prioritizing fly balls over grounders, if only for the logic of aiming at three outfielders covering lotsa terrain being more advantageous than hitting into four infielders plus the pitcher and catcher patrolling less of it.

That philosophy naturally brought an uppercut into the game.

It follows that such a swing will also make hitters susceptible to more strikeouts, which is happening.

With some interpretation of advanced metrics minimizing the impact of a strikeout, it's only natural that more hitters are taking full cuts no matter what the count, and more possibilities for bombs will exist.

Los Angeles is among the many teams that teach uppercuts as one of a swing's fundamentals.

One reason for their attraction to castoffs Justin Turner (Mets) and Chris Taylor (Mariners) was their assessment that both could quickly adapt to a high leg kick with an uppercut.

They're the type of player the 'Stros draft in the late rounds after the front office staff brings together their scouts and seamheads to compare evaluations.

In a seven-game series, hitters get longer than usual looks at the bullpens. Early appearances from those crews have their drawbacks when most relievers -- like closers in two-inning save situations -- usually only have two primary pitches.

If nothing else, no matter what the score, this scenario creates a tribute to the most convoluted logician of them all: Yogi Berra.