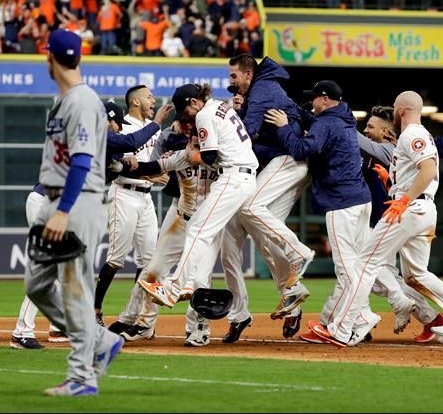 Objectively, here are the three most exciting games in World Series history:

There's now a fourth that can be added to that list.

All the elements may have been there for a wild Game 5 in Houston ...

But the billing was a re-match between the clubs' run-stingy aces, Clayton Kershaw and Dallas Keuchel. Dudes set the tone in Game 1 as well as pitching like they were double-parked. Logically, managers Dave Roberts and AJ Hinch prepared accordingly.

So much for that.

By the middle innings, their outlooks had changed.

The elements kicked in.

Notable in the clubs' competitiveness were two players redeeming themselves:

Thankfully, baseball is an inning-by-inning game. Every damn one of them will turn out to be timeless when all is said and done.

All told, the 'Stros totalled four comebacks in this 13-12, 10-inning instant classic.

It could be argued that the Dodgers needed that game more than Houston -- despite the fact it's their turn to be the home team -- because Justin Verlander is taking the hill in Game 6.

After Game 5, anyone can argue any point all they want. Doesn't matter.

In this World Series, stuff's just gonna happen whether it makes sense or not.