Published on 1-May-2019 by Alan Adamsson 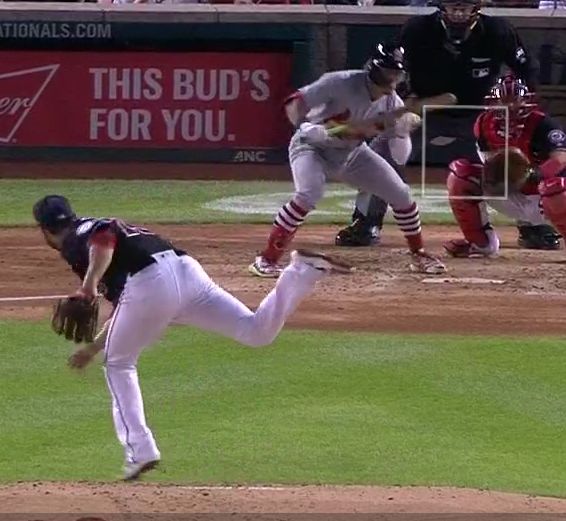 38-year-old Jeff Albers was signed by the St Louis Cardinals this past off-season to be their new hitting coach.

Fortunately, in the eyes of some, the Cards' manager is baseball lifer Mike Shildt, who doesn't mind blending the old with the new.

It's working for St Louis. Especially 2B Kolten Wong.

Known more for his glove, dude's shown in the past he can do the launch-angle thing, but being real, that's not really his thing.

Wong's fine with small ball. In BP, for example, where everyone lays down a bunt or two to start, he'll do five down each baseline.

Shildt took Wong aside before the season began, saying he was fine with Wong going small. The Cardinals now had Paul Goldschmidt batting behind Matt Carpenter at the top of the order, so Wong's role was to be a table-setter as the lineup turned over.

So Wong picks his moments.

Like the top of the fourth inning at Nationals Park with his team trailing Washington, 3-0.

Wong took stock of the situation:

In this day and age, who'd expect a batter to lay one down under those circumstances?

First of all, what the hell's that dude in the Nationals sweatshirt doing cheering with the Cardinals fans?

Then again, this would be the second game in two nights Washington would blow a lead in one inning. Maybe he saw it coming and traded himself.

Wong's ballsy, well-timed, and well-executed bitta small ball done right -- no sacrifice, just going for a hit -- put St Louis on the board.

It also extended the inning for Harrison Bader to follow with a two-run single that propelled the red-hot Cardinals to a 3-2 victory for their ninth win in ten games:

So far this season, St Louis has raised its team batting average to .267, second only to Houston's .271.

Albert's possibly got something to do with that, even though it hasn't happened for Carpenter yet. Still, he was in this position last season, too, before catching fire.

However, Wong bunting for hits harkens back to the Gas House Gang, when the likes of Pepper Martin and Frankie Frisch, who's probably looking down from somewhere at the Cards' current second-sacker with a nod of approval.

Damn. A swing like that was built for bunting outta necessity.

It got him into the Hall, though.

Wong going Old School in the modern era may not put him there, but it could help the Cardinals do a 1934 with a bitta slash-&-dash to complement their boppers. Small sample size, but so far, it's working.