Why Is A-Rod Suing MLB? What Else: Money

Published on 4-Oct-2013 by Stacey Mickles 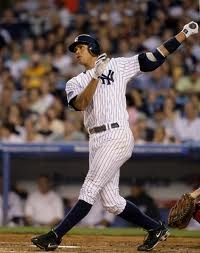 Before I could even enjoy my morning cup of coffee, I opened my Twitter feed to read that Alex Rodriguez is suing Major League Baseball.

Yes, A-Rod, in a last and desperate attempt to save his career and his reputation, has decided to sue baseball.

Don't be fooled, folks, A-Fraud doesn't give a damn about his reputation because that's already been shot to hell. What this is about is money.

According to the lawsuit, Rodriguez is accusing MLB of engaging in "tortious interference" in an effort to force him from the sport and potentially cost him tens of millions of dollars.

If A-Roid is out of the game next year, he loses a ton of money and a bunch of endorsements. But the lawsuit doesn't stop there. A-Rat's lawyers also alleged that MLB paid $150,000 in cash for stolen records related to him. His lawyers also claim that MLB paid Tony Bosch, the former head of Biogenesis, $5million "to buy his cooperation" and allege that MLB investigator Dan Mullin engaged in "an inappropriate sexual relationship with a witness whom he himself interviewed about the Biogenesis matter."

Hey Bud, If I were you, I'd pull out that evidence now that you have against A-Rod. So far, all Selig has done is to issue the usual statement to the press, denying all allegations and basically saying Rodriguez is just suing them to cover-up his own misdoings.

"While we vehemently deny the allegations in the complaint,none of those allegations is relevant to the real issue: whether Mr. Rodriguez violated the Joint Drug Prevention and Treatment Program by using and possessing numerous forms of prohibited performance-enhancing substances, including testosterone and human growth hormone, over the course of multiple years and whether he violated the Basic Agreement by attempting to cover-up his violations of the Program by engaging in a course of conduct intended to obstruct and frustrate the Office of the Commissioner's investigation."

In a way, I don't blame Rodriguez for doing this. Hey, if you're going to go out, you might as well go out fighting.

But fighting the good fight probably won't save him. Telling the truth will, whatever that truth may be.