Who Would Replace the Irreplaceable Bruce Bochy? 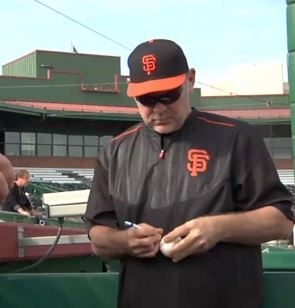 G-Fans would rather not know just how much of the World Champs' success is due to their illustrious manager.

Since speculation is oft rife in such matters, here are The Daily Player's thoughts about possible candidates to fill those Giant shoes, which are 14s or 15s, at least!

Dusty Baker ... Not! Don't even think about it. Although he's had a nice rest during his forced retirement from Cincinnati, his health has also been a question mark in the pastl. Worse still is the fact that his teams tend to choke during big games.

Will Clark ... So what if The Thrill hasn't a lick of managerial experience? Giants fans would be so jazzed that he was at the helm. It's doubtful that many, if any, would care. Clark has such a wealth of baseball knowledge, he'd be more of a natural than Redford.

Barry Bonds ... Speaking of fountains of baseball wisdom, Bonds would be another terrific choice. Of course, he's sorta become a polarizing, Pete Rose-like figure, both awed and pitied alike. The world has moved on since the steroid era and if Mark Mcgwire is allowed to coach with the Dodgers -- and the Cardinals before that -- to critical acclaim, then why not let Bonds have a crack at the Orange and Black? And hurry back, Skip.