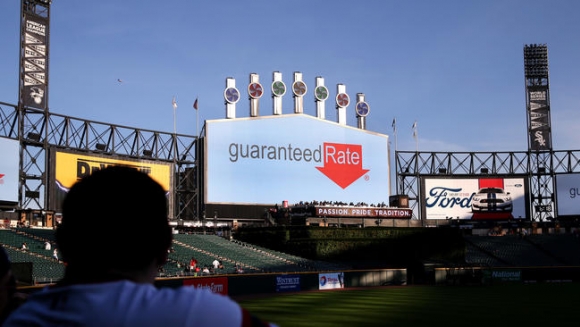 There is something special -- very special -- about the game of baseball.

It's been with this country longer than any other of the major sports.

Regardless of age, men and women, boys and girls play it from coast to coast and Arctic Circle to damn near the tropics.

From the most dense urban cities to the corn fields of Iowa.

Yes, baseball is at the very heart of America.

And what else is right there with it?

Why, money, of course.

It's far from a surprise that every aspect of the game -- like most everything else in this world -- is packaged and sold to the highest bidder.

No longer will the Pale Hose house be called US Cellular Field or even the Cell. Starting next season, fans will get to enjoy the exciting experience offered at Guaranteed Rate Field.

Now it’s not all that rare for sports venues to peddle their naming rights.

In fact, the naming rights can rake in billions of dollars for teams. This dosh can be used to help the teams improve their on-field product. Or the owner can simply use it to line his or her pockets.

But there has to be a limit to how much a team is willing to sell out. Sure, US Cellular was itself an example of selling naming rights, but at least 'Cellular Field' sounds like a legit place.

And to say the least, South Siders were not happy with the decision.

That gave two the other Chicago teams -- the Cubs and Bears -- to have a little fun at the White Sox' expense.

Well, at least it's not got that Hillary v The Donald toxic tone.

Then again, what's the point of social media if teams and fans can't continue their battles via dank memes?

So, look on the bright side, White Sox fans.

At least it’s not the most embarrassing thing to happen to the team this year.