What Tops the Mets' 12-Run Inning? Whatever It Was the Brews and Fish Just Did 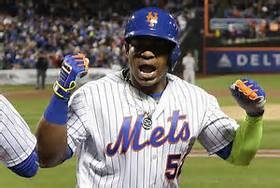 The Milwaukee Brewers will be candidates for getting no-hit every time they take the field this season. Even against Cincinnati.

But that doesn't mean they won't make it exciting.

Secondly, many baseball trainers and kinesiologists believe that 120 pitches per outing is the absolute red line in terms of long-term hurler health.

But it's only based on anecdotal evidence.

The Marlins' Adam Conley was spinning a no-hitter against the Brew Crew well into the eighth. He'd done so with little resistance, fanning seven while only walking two. No great plays were needed.

Conley was cruising in this one. As well, dude had zero history of arm issues.

But wise old sage Don Mattingly looked at the stat sheet and saw 116 pitches. So that was that.

Seriously. That was that:

This coulda been a game featuing two rarities: the trip and a no-no.

As it was, the Brews closed it to 6-3 in the ninth and had the sacks jammed when AJ Ramos struck out Jonathan VIllar.

What coulda been, indeed.

Mattingly just wasn't into extending boundaries. Conley had never pitched more than seven innings in the majors, and that was against the New York Mets last September. He hadn't allowed a run, then, either.

The San Francisco Giants coulda used him last night when they let the Amazins do this:

Maybe that's why the Mets are defending NL champions.

No coulda-beens. They're into what was.