What's In a Name? Some Parents Really Put the 'What?' in the Name! 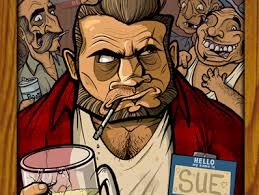 I was watching the MLB channel the other day and noticed that the Detroit Tigers had demoted pitcher/punch line Albert Alberquerque to their AAA team at Toledo.

My first reaction to hearing the bad news wasn't, "Gee whiz, he must feel terrible!"

It was actually more like "What kinda parent names their kid that?"

Better yet, which parent agreed to go along with that name rather than make an argument for say ... oh, I don't know, Jim or maybe Bob? How about Mike Alberquerque? It could simply be that his parents just had a terrific sense of humor, and who am I to judge?

There is humor to be found within the name, yet the fact remains that children can be very cruel and make life a living hell for some poor kid with a name like that. Being that I was one of  those cruel children, I was inspired by Albert to put together this list of Baseball's All-Time Worst Names. See if your favorite cracked the list.

Peter LaCock: I admit that my French is a little rusty, so is it me, or does this guy's name actually mean Dick LaDick?

Rusty Kuntz: Speaking of rusty ... rather than tempt fate, I should probably just leave this one alone. 'Way alone.

Razor Shines: ... because he thought 'Razor' looked better than 'Rison' on his baseball card, and I think he was right.

Dick Pole: Imagine the interesting and witty banter that would ensue after he would introduce himself in certain social settings. "I'm sorry, please excuse me (laughing), I beg your indulgence! (more laughter) I thought you said your name was Dick Pole?" (hearty laughter) "Oh ... it is? (awkward moment of silence) So how's that been workin' out for you then?" (uncontrollable laughter)

JJ Putz: I've heard this guy tell reporters and fans a million times, "It's pronounced Puts, like "he puts the lotion in the basket!" Yeah. OK. Putz. I can see it now, JJ on the playground gettin' the beatin' of his life, and in between blows, he's trying to tell the bully kids that "It's pronounced Puts like the hurtin' bein' Puts on me right now!"

Grant Balfour: This guy's parents named him after the intentional base on balls ... and he grew up to be a pitcher. How awesome is that!

Dick Wantz: His philosophical parents were well aware of  the old saying, "The Dick Wantz what the Dick Wantz". Have truer words ever been spoken?

Dick Manville: In an era when ballplayers worked second jobs during the off season to make ends meet, I'm pretty sure this guy was the Biker Dude in The Village People.

Johnny Dickshot: In an era when ballplayers worked second jobs during the off season to make ends meet, this guy was definately The Cowboy in The Village People.

Wonderful Terrific Mons: All the best evidence shows that his name suggests a mutually-planned pregnancy by both parental units.

Jack Glasscock: "In case of emergency break glass!" That works on so many levels!

... and finally the "Mom, How Could You Do This to Me?" Award for the worst name goes to ... Milton Bradley!

Can you imagine the unbelievable abuse this dude must have been subjected to his entire life? His parents were either completely oblivious to American pop culture of the day or they had a really warped sense of humor. The funny thing is everyone would seem so surprised when Milton would flip out during games like his name wasn't really Milton Bradley or something? This lunatic was the perennial league leader in fines and ejections and while a ticking time bomb on the field he was a convicted felon in the off season. How ironic is it that he now works as an anger management counselor?

Dick Green: This occurs after Dick Burns. If you haven't yet sought medical attention by the time a green hue appears if the visual doesn't kill you the rampant infection will.