Welcome to 500, Albert: Check Your Jacket at the Door 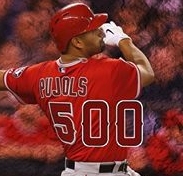 A round of applause for Mr Albert Pujols, ladies and gentlemen.

A gift card will be sent to Washington National pitcher, Taylor Jordan, who served up both shots.

Pujols is the 26th player to accomplish this feat and certainly won't be the last.

I listened to his post-game interview with José Mota at Fox Sports when he was asked about the accomplishment, when he remarked,“You don’t seek 500 every night, but you still have to respect the opposite team. I know we still had a game to play and it tasted a litter sweeter that we got the win.”

Quite the professional, if you ask me.

Pujols certainly deserves to be in this club, albeit, a so-called watered down version, given the presence of a few, PED-infused members. Yes, A-Rod, Bonds, Sosa, Palmeiro, and McGwire are just some names of those who shouldn't be a part of this club. Apparently, they hand out members-only jackets to cheaters.

However, their trangressions shouldn't cast a shadow over what Pujols accomplished. A PED-free player who was a three-time MVP in the National Leagure with two World Series wins, Pujols is the epitome of class. He's the ultimate professional who takes pride in his work ethic, which translates into what you see when he steps onto the field.

Pujols has slammed 30-plus bombs for 12 consecutive seasons -- he's the first MLB player ever to do it -- and drove in 100 teammates or more for 10 straight years.

Although his production has notably dropped off, this could be a welcome omen of good things to come for Pujols and the Halos. Marred by injuries last year and the first down year of his career the season before, Pujols is needed to step up his offensive arsenal with Josh Hamilton sidelined.

In essence, 500 is still 500, and I feel it should remain a magical threshold in baseball. Just because we have to discount a few members shouldn't dilute the magnitude of the accomplishment.

It still makes for an entertaining conversation piece over breakfast the following morning.