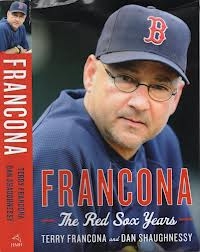 When Terry Francona became the manager of the Boston Red Sox in 2004, not many people expected things to change.

After all, the team had not won a World Series in 86 years.

Things did change, as we all know. Francona led the Bosox to a Series title in his first season, and followed that up with another one in 2007. He had the chance to do it again in 2008, but injuries caught up with them, and Tampa Bay dethroned them in an ALCS that went seven games.

This mini-era alone should have given 'Tito' -- that was his dad's nickname, and it passed to him -- a lifetime contract in Boston, but the Red Sox collapse in 2011, when they blew a nine -game lead in September, cost Francona his job and put the Red Sox organization in disarray.  After one year at ESPN, Francona returned to baseball this season with Cleveland.

This week brought the first place Indians to Fenway Park, and Francona made an appearance for the first time as an opposing manager.

There was a video tribute, a standing ovation, many hugs from his ex-players, and most of all, a 12-3 win over his former club. Francona was emotional during the video and spoke of his love for Boston and the organization. He had led them to five playoff appearances in six years, including the two aforementioned World Series wins.

A few miscues in the front office brought in free agents who underachieved (see Carl Crawford and John Lackey) and the locker room image reverted to one reminiscent of the old 'country club' days, populated by what fans and the media perceived ot be spoiled, overpriced players.

Francona took the fall for the 2011 collapse and watched from the ESPN booth the next season as Bobby Valentine made more of a mess of things last year.

But he was back at Fenway over the weekend, and with the Indians relevant again, his shadow may loom large over current Sox skipper John Farrell if the team goes into another late-season swoon.