Weeping Wilmer Walks Off a Winner 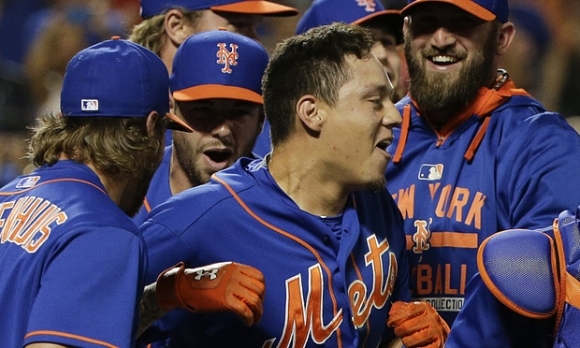 Every baseball player dreams of having his name in lights.

Being in the big leagues is one thing, but to be a national name is a whole 'nother level.

Mets second baseman Wilmer Flores was able to reach that achievement this past week, but it was probably not in the fashion he imagined.

Last Wednesday night, Flores and his New York Metropolitan teammates were on the wrong side of a trashing by the San Diego Padres. The Mets have been a pleasant surprise this year, as they've been able to hang with the heavily-favored Washington Nationals so far this season.

Their playoff hopes, though, have been hampered by a series of injuries, from stars David Wright and Travis d’Arnaud to numerous other players who've done their bit to keep the NL East a race.

While the team’s pitching has been great to date, the team’s hitting has been utter garbage. Fans begain screaming at the owners to acquire a few bats who could propel the Mets to their first post -season appearance since 2006.

With less than 48 hours to go before the non-waiver trade deadline, the clock was ticking on GM Sandy Alderson to make a move. Then, when all hope seemed lost, the tweet heard 'round the tri-state area was fired.

Mets fans were ecstatic; former Met Carlos Gomez was coming home to save their season.

In return, New York was sending Zach Wheeler -- who was currently rehabbing from Tommy John surgery -- and Flores. The infielder was expected to be pulled to complete the trade, but that didn't happen.

Flores was unaware of the pending deal and received a standing ovation by the Mets faithful in what they assumed to be his last at bat as a Met.

What with social media being immediate, somebody in the crowd informed Flores of the news, which resulted in this:

As noted, Flores had been in the Mets organization since he was 16 and was rightly beside himself.

Mets manager Terry Collins, clearly not as in touch with smartphone-laden fans as Flores was, didn’t immediately know of the trade -- and hadn't noticed his players tears -- and thus didn't pull Wilmer until the ninth inning when the front office's carrier pigeon finally arrived with the news.

Of course, it was later revealed that the trade fell through and Wilmer’s tears were all for naught.

However, the imagery was now out there, and the Flores crying debacle had soon  become national news.

Then came the fairy tale ending.

In Friday's game, Flores again received a standing O from the Mets fans, who appreciated his strong feelings for the team. And Wilmer didn'tt disappoint, as he made a diving save and scored the Mets' first run.

But he saved his crowning achievement for extra innings, where his walk-off blast won the game:

It capped a dramatic reversal of fortunes for Flores, who over the span of 48 hours had gone from weeping to winning.