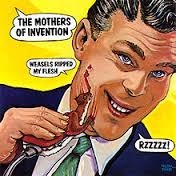 Remember Giants fans; ‘tisn’t whether we win or lose, but how they played the game.

But truth be told, things do look rather bleak for the Orange and Black.

As the 2013 season enters ebb-tide, 'Brain' Sabean, in a brilliant ploy to weasel better terms, feigned defeat with unenthusiastic trade banter. Sabean’s ruse to preserve the Giants trade budget may actually be on the level. By tacitly acknowledging that the World Champions are a limp biscuit, he adds lemony snickets onto G-fans’ open wounds.

Have the Giants used up all of their good baseball karma in the last two-out-of-three seasons?

If so, perhaps it is time to dispense with the immortal refrains of the usual happy-go-lucky tunes that normally emanate out of AT&T Park’s high-tech sound system. The Giants organization should embrace reality and air instead, in its entirety, Frank Zappa’s Weasels Ripped My Flesh album, while assuring that they post the album cover instead of any player photos on the old Jumbotron. This needs to happen ASAP and continue as long as the team remains in last place.

Still, some diehard Giants fans like myself insist on dying hard with a vengeance! What do you think of that, Franz?

Baseball being a game of streaks, the only moderately successful (at best) NL Western Division leaders’ fortunes could nevertheless also go awry. With a key injury here and some bad luck there, the Dodgers trolley might derail like a Lone Ranger stop motion effect. The Diamondbacks could be overly charmed by their life at the top. They may succumb to life in baseball’s fast lane and exhibit the effect known as ‘choking’.

After all, sports fans, misery loves company. With late season slumps by the current front-runners and a shipment of Wonderboys from Redford, the Giants might yet stumble back with broke backs, back up the mountain into contention in the NL West.