Wanna Win Now? Be Careful What You Wish For 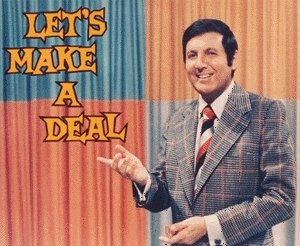 Have you ever experienced buyer’s remorse?

For the average dude, the onset of guilt usually hits the next morning when he's had a sleepless night fretting over how he's going to make that massive car payment on the ride he just went crazy for and whether it's the chick magnet he imagined when he first saw it.

Whatever the high-dollar purchase, worrying about money is normal, but not when you’re a big league general manager. The owner gives you a budget number and says: “Get whatever player you need to get us to the World Series!”

Then said GM calls around to other GM’s whose ball clubs are so far out of first place that they’re not looking to next season, but the season after-next-after-next if they’re lucky.  Since the non-waiver trade deadline is a week away, I thought we would take off the rose-colored glasses and evaluate the truly, historically horrendous trades that have been made ... and boy, have there been some doozies!

Now, keep in mind, these are trades that were made near the waiver/non-waiver trade deadlines and do not include brain-dead deals made in the off-season, which is why you won’t see Ryne Sandberg for Larry Bowa on this list!

So here we go. Grab some seeds, soda, and a ballpark frank and enjoy the 10 worst deadline deals, in order of significance or just utter incompetence by upper management!

10)  18 July 1993 – San Diego Padres trade Fred McGriff to the Atlanta Braves for Vince Moore, Donnie Elliott, and Wilson Nieves.  Really, San Diego? The Braves had a plethora of talent in the early 90's and Melvin Nieves is the best player you get for the Crime Dog?

9)  29 July 1988 – Boston Red Sox trade Brady Anderson and Curt Schilling to the Baltimore Orioles for Mike Boddicker.  Red Sox nation was eager to win a World Series, having lost a heartbreaker to the Mets in 1986. This was clearly an overreaction to Bill Buckner! Ironically, Schilling helped Boston win a title in 2007. How’s that for boomerang effect?

8)  26 July 2000 – Philadelphia Phillies trade Curt Schilling to the Arizona Diamondbacks for Travis Lee, Nelson Figueroa, Vicente Padilla, and Omar Daal.  Man, Curt Schilling has been involved in a lot of terrible trades! He was also traded to the Astros for Glenn Davis, but that was an off-season swap. Remember, we’re reviewing deadline deals. Focus, people!

7)  12 August 1987 – Detroit Tigers trade John Smoltz to the Atlanta Braves for Doyle Alexander.  Whenever you hear about the MLB trade deadline, you will most certainly hear a talking head on the four-letter (word) network mention this deal, which actually worked well for the Tigers as they made the playoffs in 1987 as Alexander pitched amazingly for them down the stretch. Smoltz, however, turned into one of the most clutch post-season pitchers ever and did his best Dennis Eckersley impersonation late in his career, turning into a dominant reliever.

6)  25 May 1989 – Montréal Expos trade Randy Johnson, Brian Holman, and Gene Harris to the Seattle Mariners for Mark Langston.  This trade was made a little earlier in the season, but still qualifies, as the Expos had a solid team in 1989 and needed a steady veteran pitcher. The Mariners were going nowhere, as was true of their first 20 years in existence, and were able to acquire the Big Unit. Langston went on to have a nice career and, ironically, lost to Randy Johnson in the one-game playoff while with the Angels to decide the AL West title after the 1995 season. I’d say the Mariners got the most out of Randy Johnson. The Diamondbacks might disagree!

5)  30 August 1990 – Boston Red Sox trade Jeff Bagwell to the Houston Astros for Larry Andersen.  Another one of those infamous deadline deals that may make some GM’s hesitant to pull the trigger. With the curse of the Bambino still lingering in Boston and the Red Sox already set at the corner infield spots, they decided to part with a young New Britain third baseman for a quality veteran right-handed pitcher. The BoSox did make the post-season but lost to the mighty A’s, and Bagwell went on to win 1991 NL Rookie of the Year and 1994 NL MVP with Houston.

4)  21 June 1989 – New York Yankees trade Rickey Henderson to the Oakland A’s for Greg Cadaret, Eric Plunk, and Luis Polonia.  Did you just experience déja vu? Didn’t the Yankees and A’s agree to trade for Rickey already? Yes, a couple years earlier in 1984, but Oakland wanted him back, which paid immediate dividends as the A’s went on to win the World Series that year, with Henderson winning ALCS MVP honors.

3)  31 July 1997 – Oakland Athletics trade Mark McGwire to the St Louis Cardinals for TJ Mathews, Eric Ludwick, and Blake Stein.  When Tony LaRussa took over as skipper of the Cardinals, he not only took most of his coaching staff but his former players, too. McGwire went on an historic power surge -- yeah, we know; we know -- after arriving in St Louis, and they acquired him for literally nothing.

2)  31 July 1997 – Seattle Mariners trade Jason Varitek and Derek Lowe to the Boston Red Sox for Heathcliff Slocumb.  The trade that finally ended the curse, as the Red Sox won World Series titles in 2004 and 2007 with both Varitek and Lowe being key contributors. If you don’t know the back story, Mariners manager Lou Piniella was so desperate for bullpen help, he insisted GM Woody Woodward make the trade Boston GM Dan Duquette proposed. It's probably why Piniella's own front office career didn't last very long.

1)  27 June 2002 - Montreal Expos trade Cliff Lee, Grady Sizemore, Brandon Philips, and Lee Stevens to the Cleveland Indians for Bartolo Colón.  That sound you heard was my palm slapping my forehead! This trade was probably the catalyst that caused the Expos to move to Washington DC and play as the Nationals. It was like an entire team in the witness protection program!