Wainwright's Foot Breaks Down, but His Bat's OK 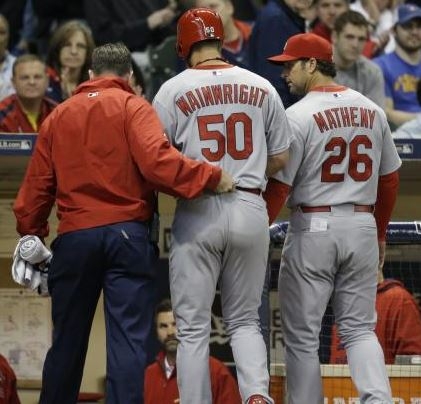 So, the ace of the St Louis Cardinals is done for the season.

All because of what happens to pitchers in the batter's box finally caught up with him.

That Adam Wainwright managed to last for 582 career plate appearances before his body broke down is a mystery for the ages. Must be due to superior conditioning.

But not superior enough.

It seems like every year, the Cardinals have something like this hit their rotation, and they dip into their pitching-rich organization to find another hero. Who knows? Maybe this time, it'll actually be southpaw Jaime García, whose own trials and tribs have tested the mettle of Redbird resources in seasons past.

Whatever. This is the perennially contending Cardinals, whose vaunted Way boils down to their always finding a way.

As storyline convenience would have it, the Washington Nationals' new prized possession, Max Scherzer, jammed his wrist while batting in a 4-1 loss to St Louis. Now he could miss a start, and two grains of grist is enough for the NL-should-DH mill to rumble back into action.

Ron Blomberg was the first-ever DH back in 1973:

No they aren't, and if the National League ever adds it, the reason will be business-related, such as the oft-mentioned bargaining chip ploy during a future collective bargaining negotiation. Until then, the issue remains a classic less-filling/tastes-great conundrum:

Hardly anyone ever speaks of compromise.

True, it is a lost art in the USA, but interesting possibilities still surface. Here's one, from the comment section in NBC Sports' Hardball Talk, submitted by tccoates at 4:21edt:

With a bit of refinement, that could be fertile middle ground. For example, after each pitching change, the DH would only be substituted when his spot in the order came up. Thus, when a manager goes to the pen, he's got more roster strategy to consider but won't be burning his bench any more than the usual number of times a lineup turns over.

Yep. Slim and none. And Slim left town.