Valentine Love May Be in the Air; It's Not Necessarily in the Dugout

Time spent with loved ones is always time well spent, and that’s the the purpose of Valentine’s Day.

In addition, of course, to buying over-priced roses and pampering your princess.

Love in the baseball world has been a common theme throughout history, with fans' love of the game being paramount. And who can forget Joe DiMaggio and Marilyn Monroe? Now that’s true love. For a while, at least.

Whenever you’re part of a team -- whether on the diamond or in business -- personality conflicts are sure to arise with so many egos involved. But the show must go on, or someone doesn't get paid.

So, in the spirit of St Valentine as the unofficial patron saint of calling a truce, it's time to present a list of the Top Ten dudes in baseball history who learned to coexist only out of necessity ... or contractual obligations.

It's highly unlikely they exchanged Valentine’s cards with one another. In many cases, there was certainly no love lost.

So, without further ado, here's the best of the worst love, hate, love relationships in baseball history:

The greatest Mariner ever forced a trade from Seattle after playing just half a season in their spacious new ballpark that opened in June 1999. Gone was the concrete jungle and short porch in right field at the Kingdome, which produced back-to-back 56-homer seasons for Junior.

Although he claimed he wanted to be closer to his family when traded to the Cincinnati Reds, inside sources stated he was unhappy with the new ballpark dimensions. And when he began calling the press box, demanding that the roof be closed for whatever reason, Seattle management decided it was indeed time for him to go.

It’s ironic that Griffey’s stardom practically built Safeco Field -- along with voter-approved financing -- yet Griffey wasn’t pleased with the design. Did he meet with the architect? That would’ve been helpful.

Pete Rose was banned from baseball for betting on the Reds while managing there, and to this day, his defiant attitude doesn’t seem to be helping his cause for getting reinstated and ultimately into the Hall of Fame.

In his memoir, My Prison Without Bars, Rose boldly stated that he bet on his team to win every night. That is, every night except when Bill Gullickson pitched. It’s easy to have confidence in your players when you trot out a lineup of Eric Davis, Barry Larkin, Dave Parker and Kal Daniels. 'Way to save your money on Gullickson, dude. Apparently Tom Browning inspired more confidence.

In the early 20th century, the Detroit Tigers were kings of the American League, reaching the World Series three straight years from 1907 to 1909. They never won; in fact, they were victims of the Chicago Cubs' last championship in 1908. Their success was in large part due to the tandem of Cobb and Crawford manning the lawn of Bennett Park. Imagine what these two could’ve done playing home games in Tiger Stadium today!

Cobb was not adored by his teammates, and he claimed Crawford was jealous of playing second fiddle to him, the best player in the AL at the time. Crawford clearly didn't like the preferential treatment Cobb received, like showing up late to spring training and receiving lavish quarters away from the rest of the team on road trips. Cobb accused Crawford of intentionally fouling balls off while he was trying to steal bases and not helping in the outfield.

Crawford stated Cobb was a terrible outfielder and blamed him for making errors. He further accused Cobb of leaving the ballpark steaming mad because he went hitless and lost the batting title to Nap Lajoie of the Philadelphia Athletics. Pointedly, Crawford and other Tigers teammates sent telegrams congratulating Lajoie on his accomplishment.

Could you imagine if these two played in today’s social media and tabloid environment? Oh, the headlines!

We’re not trying to pick on the Cincinnati Reds, but they’ve provided a ton of fodder over the years. After a late September game in 1992 that the Reds had just won against the Atlanta Braves, 3-2, barely clinging to the division lead, a reporter asked Piniella why he didn’t use Dibble in the game. Piniella claimed that his star closer had a bum shoulder, and fellow Nasty Boy Norm Charlton had a terrific season. When the same reporter told Dibble what Piniella said, Dibble claimed that Piniella had misled him. Piniella learning of Dibble’s statement, immediately became incensed, and confronted Dibble screaming, "You’re a liar!" Chaos ensued, as the two had a wrestling match in the clubhouse, which was quickly broken up by teammates. The video speaks for itself:

Now would be a good time for a reminder that this is an R-rated site.

6. Charlie Finley vs the Almighty Dollar

Irascible businessman Charlie O purchased the Kansas City Athletics and moved them to Oakland in 1968, where they went on to claim five consecutive division titles and three straight World Series championships (1972-1974).

Ahead of his time in many ways -- he was the driving force behind World Series games in prime time, the DH, and colorful uniforms -- Finley could've changed the course of pro sports history in North America ... if he wasn't Charlie Finley.

In the best book ever written about the business of baseball, Lords of the Realm, author John Helyar recounted that seminal moment:

So, only Finley practiced what he advocated. Catfish Hunter signed with the Yankees as a free agent before the 1975 season because of a contract dispute. Finley prompted the first real fire sale, which put the 1998 Florida Marlins to shame. Commissioner Bowie Kuhn had to intervene when Finley tried to sell Vida Blue to the Reds invoking the Best Interests of the Game clause. Ironically, this was after Finley had offered Blue a bonus -- which was refused -- to legally change his given name to True.

Finley traded Reggie Jackson and Ken Holtzman to the Orioles before the 1976 season and tried to sell Rollie Fingers and Joe Rudi to the Red Sox. He was always scheming to sell the A’s and devalue the franchise when he claimed thestadium wasn’t suitable and Oakland couldn’t support a major league franchise. Where have we heard that before? Trying to screw over players who brought you multiple championships is not how to conduct business.

It's the one baseball business principle that Finley didn't get.

The Bash Brothers took the league by storm in 1987 when McGwire set a rookie record by crushing 49 home runs as they earned back-to-back Rookie of the Year honors. 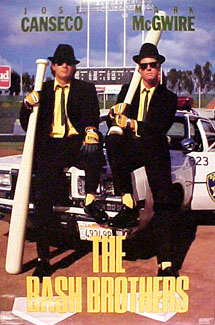 Good thing Charlie O didn’t own the team then; imagine what he could get on the open market for this pair?

Canseco called out McGwire in his autobiography for using steroids during their playing days, to which McGwire retorted last summer, "I don’t care to speak to him ever again."

Leading Oakland to three straight World Series appearances -- and winning the 1989 Earthquake Series -- this looked like a legendary pairing of sluggers along the lines of Mantle & Maris. Oakland was forced to decide between the two when McGwire had a huge comeback season in 1992, so they sent Canseco to the Texas Rangers in a blockbuster trade that brought slugger Ruben Sierra to the A’s. By some mysterious coincidence, Juan González, Rafael Palmeiro, and Iván Rodríguez evolved into bona fide sluggers shortly after Canseco’s arrival in Fort Worth.

This could be categorized as 3a-3b listing, with the Martin-Jackson feud squarely connected to the late Yankees owner and a manager he fired and re-hired more than a union electrician.

As you'll see with the coinciding entry, Billy Martin and Yankees slugger Reggie Jackson weren’t an ideal pairing like, say, Merlot and top sirloin. Steinbrenner fired Martin for suspending Jackson when he bunted into a strikeout. Could you see this playing out in 2015? There would be grievance hearings, union strong-arming, Twitter battles, friends being deleted from Facebook, and perhaps even a bobblehead promotion at a stadium near you.

Martin was hired and fired a grand total of five times by The Boss, and he would’ve likely been hired one more time but was tragically killed in a car accident on Christmas Day 1989.

Here’s a pair to draw to. They pulled it together long enough to win a World Series title in 1977 where Jackson became the first player to win Series MVP awards with two different teams; the 1973 A’s being his other. Martin was fired halfway through the 1978 season when he told reporters that Jackson and Steinbrenner deserved each other because one's a born liar and the other's convicted. Martin was rehired during the 1979 season, even though Bob Lemon had led the team to a 34-31 record and were the defending champs.

Another lively spirit was on that late 1970’s Yankees team: future Reds Manager Lou Piniella. Can’t we just all get along?

It’s easy to gaze upon the visage of Bud Selig and surmise he was born without common sense, pizzazz, or a mirror, but consensus building among egocentric kajillionaires is at the top of his skills list. MLB saw more growth under his leadership than at any other time in history.

However, Selig had plenty of gaffes and missteps along the way, capped by the Tie in Milwaukee when he fervently threw up his hands as if to surrender when the 2002 All-Star game ran out of pitchers in extra innings. The best of his worst? Let us count the ways:

It’s difficult to look at this list and not think that MLB merely endured under Selig’s tenure. The expanded playoff format and interleague play are the top two accomplishments. Now if they can just get him a trim around the ears on that statue.

This saga has been ongoing ever since A-Rod, aka A-Fraud, came to the Bronx in 2005. Great expectations were placed upon the young stud, and he didn’t disappoint, taking home AL MVP honors his first season in pinstripes.

However, Yankee GM Brian Cashman didn’t envision just one World Series title -- 2009 -- when he traded Alfonso Soriano to the Rangers for A-Roid. Off the field issues have outweighed the on-field accomplishments in what is still a very fluid situation. One of the most anticipated topics of the 2015 season will be the continuing soap opera. Who will blink first?

Are they selling tickets to this event? Because it might sell out. Who wouldn’t want to watch that train wreck live and in person?

One thing is certain: dude won’t have to worry about which cap he’ll wear on his HOF plaque. There's no chance in hell he’s getting into Cooperstown.

Think of this list the next time you and your significant other -- not quite a spouse, more than a friend; a sprend? -- are having your differences. It could be worse.